Hedge Funds Have Never Been This Bullish On Dine Brands Global, Inc. (DIN)

Is Dine Brands Global, Inc. (NYSE:DIN) a good bet right now? We like to analyze hedge fund sentiment before doing days of in-depth research. We do so because hedge funds and other elite investors have numerous Ivy League graduates, expert network advisers, and supply chain tipsters working or consulting for them. There is not a shortage of news stories covering failed hedge fund investments and it is a fact that hedge funds’ picks don’t beat the market 100% of the time, but their consensus picks have historically done very well and have outperformed the market after adjusting for risk.

Dine Brands Global, Inc. (NYSE:DIN) was in 20 hedge funds’ portfolios at the end of the fourth quarter of 2018. DIN investors should pay attention to an increase in enthusiasm from smart money of late. There were 19 hedge funds in our database with DIN holdings at the end of the previous quarter. Our calculations also showed that DIN isn’t among the 30 most popular stocks among hedge funds.

How have hedgies been trading Dine Brands Global, Inc. (NYSE:DIN)? 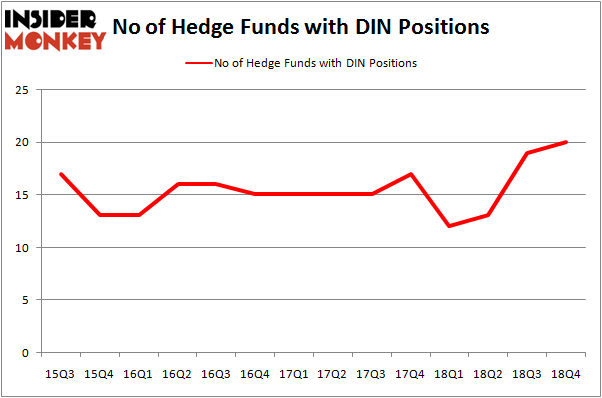 Among these funds, MSD Capital held the most valuable stake in Dine Brands Global, Inc. (NYSE:DIN), which was worth $49.9 million at the end of the fourth quarter. On the second spot was Renaissance Technologies which amassed $19 million worth of shares. Moreover, Citadel Investment Group, Ancora Advisors, and GLG Partners were also bullish on Dine Brands Global, Inc. (NYSE:DIN), allocating a large percentage of their portfolios to this stock.

As one would reasonably expect, some big names were leading the bulls’ herd. Marshall Wace LLP, managed by Paul Marshall and Ian Wace, established the most valuable position in Dine Brands Global, Inc. (NYSE:DIN). Marshall Wace LLP had $3 million invested in the company at the end of the quarter. John Tompkins’s Tyvor Capital also initiated a $1.7 million position during the quarter. The other funds with new positions in the stock are David Costen Haley’s HBK Investments, Michael Platt and William Reeves’s BlueCrest Capital Mgmt., and Ronald Hua’s Qtron Investments.

As you can see these stocks had an average of 13.75 hedge funds with bullish positions and the average amount invested in these stocks was $104 million. That figure was $115 million in DIN’s case. Masonite International Corp (NYSE:DOOR) is the most popular stock in this table. On the other hand Getty Realty Corp. (NYSE:GTY) is the least popular one with only 8 bullish hedge fund positions. Compared to these stocks Dine Brands Global, Inc. (NYSE:DIN) is more popular among hedge funds. Our calculations showed that top 15 most popular stocks) among hedge funds returned 24.2% through April 22nd and outperformed the S&P 500 ETF (SPY) by more than 7 percentage points. Hedge funds were also right about betting on DIN as the stock returned 32% and outperformed the market by an even larger margin. Hedge funds were clearly right about piling into this stock relative to other stocks with similar market capitalizations.