Hedge Funds Have Never Been This Bullish On Cummins Inc. (CMI)

The 700+ hedge funds and famous money managers tracked by Insider Monkey have already compiled and submitted their 13F filings for the second quarter, which unveil their equity positions as of June 28. We went through these filings, fixed typos and other more significant errors and identified the changes in hedge fund portfolios. Our extensive review of these public filings is finally over, so this article is set to reveal the smart money sentiment towards Cummins Inc. (NYSE:CMI).

Is Cummins Inc. (NYSE:CMI) undervalued? Investors who are in the know are in an optimistic mood. The number of bullish hedge fund bets improved by 3 recently. Our calculations also showed that CMI isn’t among the 30 most popular stocks among hedge funds. 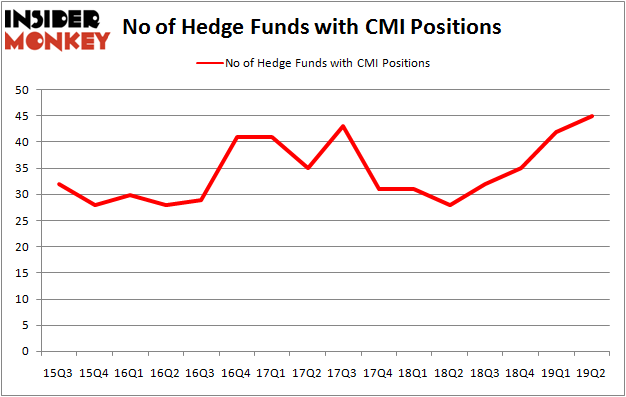 Unlike some fund managers who are betting on Dow reaching 40000 in a year, our long-short investment strategy doesn’t rely on bull markets to deliver double digit returns. We only rely on hedge fund buy/sell signals. Let’s take a peek at the recent hedge fund action regarding Cummins Inc. (NYSE:CMI).

When looking at the institutional investors followed by Insider Monkey, Cliff Asness’s AQR Capital Management has the most valuable position in Cummins Inc. (NYSE:CMI), worth close to $400.4 million, amounting to 0.4% of its total 13F portfolio. On AQR Capital Management’s heels is Two Sigma Advisors, managed by John Overdeck and David Siegel, which holds a $190 million position; the fund has 0.5% of its 13F portfolio invested in the stock. Some other peers with similar optimism consist of Brandon Haley’s Holocene Advisors, Peter Rathjens, Bruce Clarke and John Campbell’s Arrowstreet Capital and Noam Gottesman’s GLG Partners.