Hedge Funds Have Never Been This Bullish On Crown Holdings, Inc. (CCK)

Legendary investors such as Jeffrey Talpins and Seth Klarman earn enormous amounts of money for themselves and their investors by doing in-depth research on small-cap stocks that big brokerage houses don’t publish. Small cap stocks -especially when they are screened well- can generate substantial outperformance versus a boring index fund. That’s why we analyze the activity of those elite funds in these small-cap stocks. In the following paragraphs, we analyze Crown Holdings, Inc. (NYSE:CCK) from the perspective of those elite funds.

Crown Holdings, Inc. (NYSE:CCK) has seen an increase in hedge fund sentiment in recent months. Our calculations also showed that CCK isn’t among the 30 most popular stocks among hedge funds.

How have hedgies been trading Crown Holdings, Inc. (NYSE:CCK)? 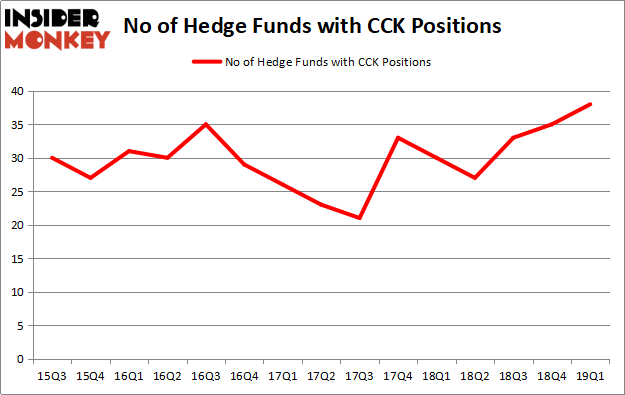 Among these funds, Adage Capital Management held the most valuable stake in Crown Holdings, Inc. (NYSE:CCK), which was worth $164.3 million at the end of the first quarter. On the second spot was Rivulet Capital which amassed $138 million worth of shares. Moreover, Viking Global, Citadel Investment Group, and Firefly Value Partners were also bullish on Crown Holdings, Inc. (NYSE:CCK), allocating a large percentage of their portfolios to this stock.

With a general bullishness amongst the heavyweights, some big names have been driving this bullishness. Viking Global, managed by Andreas Halvorsen, created the most outsized position in Crown Holdings, Inc. (NYSE:CCK). Viking Global had $110.6 million invested in the company at the end of the quarter. Bernard Selz’s Selz Capital also made a $9.3 million investment in the stock during the quarter. The other funds with brand new CCK positions are Anand More’s SAYA Management, Nick Niell’s Arrowgrass Capital Partners, and Curtis Schenker and Craig Effron’s Scoggin.

As you can see these stocks had an average of 25.5 hedge funds with bullish positions and the average amount invested in these stocks was $534 million. That figure was $1022 million in CCK’s case. Masimo Corporation (NASDAQ:MASI) is the most popular stock in this table. On the other hand Bright Horizons Family Solutions Inc (NYSE:BFAM) is the least popular one with only 18 bullish hedge fund positions. Compared to these stocks Crown Holdings, Inc. (NYSE:CCK) is more popular among hedge funds. Our calculations showed that top 20 most popular stocks among hedge funds returned 1.9% in Q2 through May 30th and outperformed the S&P 500 ETF (SPY) by more than 3 percentage points. Hedge funds were also right about betting on CCK as the stock returned 2.2% during the same period and outperformed the market by an even larger margin. Hedge funds were clearly right about piling into this stock relative to other stocks with similar market capitalizations.