Hedge Funds Have Never Been This Bullish On Crinetics Pharmaceuticals, Inc. (CRNX)

Crinetics Pharmaceuticals, Inc. (NASDAQ:CRNX) was in 10 hedge funds’ portfolios at the end of the second quarter of 2019. CRNX shareholders have witnessed an increase in activity from the world’s largest hedge funds in recent months. There were 9 hedge funds in our database with CRNX holdings at the end of the previous quarter. Our calculations also showed that CRNX isn’t among the 30 most popular stocks among hedge funds (see the video below).

At the end of the second quarter, a total of 10 of the hedge funds tracked by Insider Monkey held long positions in this stock, a change of 11% from one quarter earlier. Below, you can check out the change in hedge fund sentiment towards CRNX over the last 16 quarters. So, let’s find out which hedge funds were among the top holders of the stock and which hedge funds were making big moves. 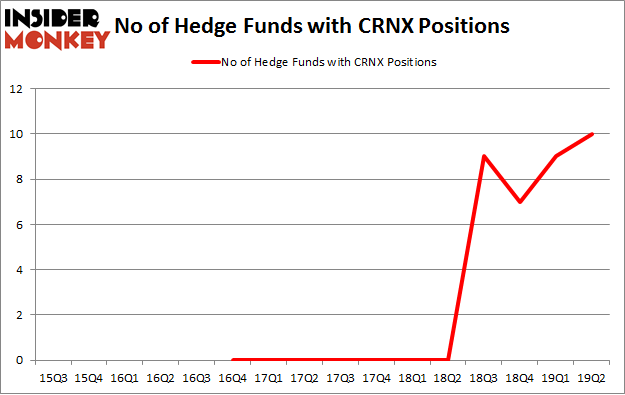 Of the funds tracked by Insider Monkey, Albert Cha and Frank Kung’s Vivo Capital has the biggest position in Crinetics Pharmaceuticals, Inc. (NASDAQ:CRNX), worth close to $84.4 million, accounting for 7.9% of its total 13F portfolio. On Vivo Capital’s heels is Perceptive Advisors, managed by Joseph Edelman, which holds a $64.7 million position; 1.5% of its 13F portfolio is allocated to the stock. Other professional money managers with similar optimism contain Samuel Isaly’s OrbiMed Advisors, Peter Kolchinsky’s RA Capital Management and Phill Gross and Robert Atchinson’s Adage Capital Management.

Consequently, specific money managers have been driving this bullishness. Polar Capital, managed by Brian Ashford-Russell and Tim Woolley, assembled the most outsized position in Crinetics Pharmaceuticals, Inc. (NASDAQ:CRNX). Polar Capital had $2.5 million invested in the company at the end of the quarter. Ken Griffin’s Citadel Investment Group also made a $0.3 million investment in the stock during the quarter.

As you can see these stocks had an average of 8.5 hedge funds with bullish positions and the average amount invested in these stocks was $68 million. That figure was $267 million in CRNX’s case. ORBCOMM Inc (NASDAQ:ORBC) is the most popular stock in this table. On the other hand Nicolet Bankshares Inc. (NASDAQ:NCBS) is the least popular one with only 4 bullish hedge fund positions. Crinetics Pharmaceuticals, Inc. (NASDAQ:CRNX) is not the most popular stock in this group but hedge fund interest is still above average. This is a slightly positive signal but we’d rather spend our time researching stocks that hedge funds are piling on. Our calculations showed that top 20 most popular stocks among hedge funds returned 24.4% in 2019 through September 30th and outperformed the S&P 500 ETF (SPY) by 4 percentage points. Unfortunately CRNX wasn’t nearly as popular as these 20 stocks and hedge funds that were betting on CRNX were disappointed as the stock returned -39.8% during the third quarter and underperformed the market. If you are interested in investing in large cap stocks with huge upside potential, you should check out the top 20 most popular stocks among hedge funds as many of these stocks already outperformed the market so far this year.