Legendary investors such as Jeffrey Talpins and Seth Klarman earn enormous amounts of money for themselves and their investors by doing in-depth research on small-cap stocks that big brokerage houses don’t publish. Small cap stocks -especially when they are screened well- can generate substantial outperformance versus a boring index fund. That’s why we analyze the activity of those elite funds in these small-cap stocks. In the following paragraphs, we analyze CorVel Corporation (NASDAQ:CRVL) from the perspective of those elite funds.

CorVel Corporation (NASDAQ:CRVL) investors should be aware of an increase in hedge fund interest of late. CRVL was in 15 hedge funds’ portfolios at the end of December. There were 11 hedge funds in our database with CRVL positions at the end of the previous quarter. Our calculations also showed that crvl isn’t among the 30 most popular stocks among hedge funds.

Heading into the first quarter of 2019, a total of 15 of the hedge funds tracked by Insider Monkey held long positions in this stock, a change of 36% from the second quarter of 2018. On the other hand, there were a total of 12 hedge funds with a bullish position in CRVL a year ago. With hedgies’ capital changing hands, there exists a select group of notable hedge fund managers who were increasing their stakes substantially (or already accumulated large positions). 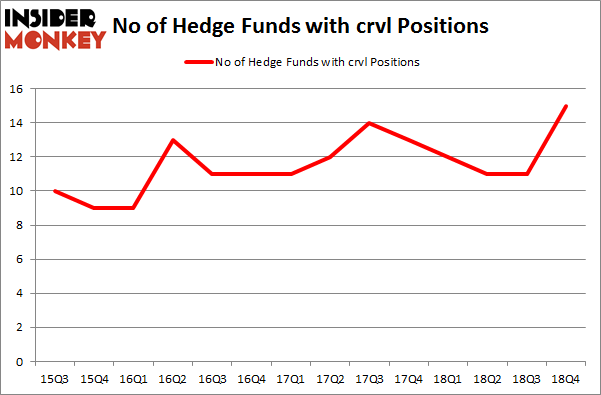 More specifically, Renaissance Technologies was the largest shareholder of CorVel Corporation (NASDAQ:CRVL), with a stake worth $87.4 million reported as of the end of December. Trailing Renaissance Technologies was Ancora Advisors, which amassed a stake valued at $8.7 million. AQR Capital Management, Millennium Management, and GLG Partners were also very fond of the stock, giving the stock large weights in their portfolios.

Now, some big names have been driving this bullishness. Citadel Investment Group, managed by Ken Griffin, assembled the most valuable position in CorVel Corporation (NASDAQ:CRVL). Citadel Investment Group had $0.7 million invested in the company at the end of the quarter. Matthew Hulsizer’s PEAK6 Capital Management also initiated a $0.4 million position during the quarter. The other funds with new positions in the stock are Peter Muller’s PDT Partners, Joel Greenblatt’s Gotham Asset Management, and Matthew Hulsizer’s PEAK6 Capital Management.

As you can see these stocks had an average of 16.5 hedge funds with bullish positions and the average amount invested in these stocks was $200 million. That figure was $113 million in CRVL’s case. Glu Mobile Inc. (NASDAQ:GLUU) is the most popular stock in this table. On the other hand Huron Consulting Group (NASDAQ:HURN) is the least popular one with only 13 bullish hedge fund positions. CorVel Corporation (NASDAQ:CRVL) is not the least popular stock in this group but hedge fund interest is still below average. This is a slightly negative signal and we’d rather spend our time researching stocks that hedge funds are piling on. Our calculations showed that top 15 most popular stocks) among hedge funds returned 24.2% through April 22nd and outperformed the S&P 500 ETF (SPY) by more than 7 percentage points. Unfortunately CRVL wasn’t nearly as popular as these 15 stock (hedge fund sentiment was quite bearish); CRVL investors were disappointed as the stock returned 8.2% and underperformed the market. If you are interested in investing in large cap stocks with huge upside potential, you should check out the top 15 most popular stocks) among hedge funds as 13 of these stocks already outperformed the market this year.