After several tireless days we have finished crunching the numbers from nearly 750 13F filings issued by the elite hedge funds and other investment firms that we track at Insider Monkey, which disclosed those firms’ equity portfolios as of June 28. The results of that effort will be put on display in this article, as we share valuable insight into the smart money sentiment towards Corindus Vascular Robotics Inc (NYSE:CVRS).

Corindus Vascular Robotics Inc (NYSE:CVRS) investors should be aware of an increase in enthusiasm from smart money in recent months. Our calculations also showed that CVRS isn’t among the 30 most popular stocks among hedge funds (see the video below). 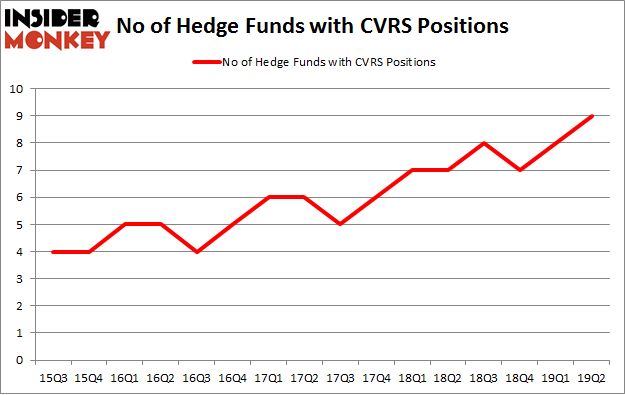 With a general bullishness amongst the heavyweights, key hedge funds were leading the bulls’ herd. Two Sigma Advisors, managed by John Overdeck and David Siegel, initiated the biggest position in Corindus Vascular Robotics Inc (NYSE:CVRS). Two Sigma Advisors had $0.2 million invested in the company at the end of the quarter. D. E. Shaw’s D E Shaw also made a $0.1 million investment in the stock during the quarter. The only other fund with a brand new CVRS position is Joel Greenblatt’s Gotham Asset Management.

As you can see these stocks had an average of 8.5 hedge funds with bullish positions and the average amount invested in these stocks was $20 million. That figure was $144 million in CVRS’s case. Koppers Holdings Inc. (NYSE:KOP) is the most popular stock in this table. On the other hand Summit Midstream Partners LP (NYSE:SMLP) is the least popular one with only 4 bullish hedge fund positions. Corindus Vascular Robotics Inc (NYSE:CVRS) is not the most popular stock in this group but hedge fund interest is still above average. Our calculations showed that top 20 most popular stocks among hedge funds returned 24.4% in 2019 through September 30th and outperformed the S&P 500 ETF (SPY) by 4 percentage points. Hedge funds were also right about betting on CVRS as the stock returned 43.6% during the third quarter and outperformed the market. Hedge funds were rewarded for their relative bullishness.

Hedge Funds Have Never Been This Bullish On Seaboard Corporation (SEB)
Monthly Newsletter Strategy
Download a free copy of our newsletter and see the details inside!
Hedge Fund Resource Center
Related News
These Hedge Funds Were Right Betting On Corindus Vascular Robotics Inc (CVRS) 11 Largest Auto Insurance Companies In The US In 2019 10 Poorest Cities in America in 2019 8 Lowest Tar and Nicotine Cigarette Brands in 2019
Billionaire Hedge Funds