Hedge funds are known to underperform the bull markets but that’s not because they are terrible at stock picking. Hedge funds underperform because their net exposure in only 40-70% and they charge exorbitant fees. No one knows what the future holds and how market participants will react to the bountiful news that floods in each day. However, hedge funds’ consensus picks on average deliver market beating returns. For example the Standard and Poor’s 500 Total Return Index ETFs returned 27.5% (including dividend payments) through the end of November. Conversely, hedge funds’ top 20 large-cap stock picks generated a return of nearly 37.4% during the same period, with the majority of these stock picks outperforming the broader market benchmark. Interestingly, an average long/short hedge fund returned only a fraction of this value due to the hedges they implemented and the large fees they charged. If you pay attention to the actual hedge fund returns versus the returns of their long stock picks, you might believe that it is a waste of time to analyze hedge funds’ purchases. We know better. That’s why we scrutinize hedge fund sentiment before we invest in a stock like Consolidated Communications Holdings Inc (NASDAQ:CNSL).

Consolidated Communications Holdings Inc (NASDAQ:CNSL) investors should pay attention to an increase in hedge fund sentiment of late. Our calculations also showed that CNSL isn’t among the 30 most popular stocks among hedge funds (click for Q3 rankings and see the video below for Q2 rankings).

In the eyes of most stock holders, hedge funds are viewed as unimportant, outdated financial vehicles of the past. While there are over 8000 funds with their doors open today, Our experts look at the bigwigs of this club, approximately 750 funds. It is estimated that this group of investors have their hands on most of the smart money’s total capital, and by keeping track of their highest performing equity investments, Insider Monkey has formulated numerous investment strategies that have historically outperformed Mr. Market. Insider Monkey’s flagship short hedge fund strategy outrun the S&P 500 short ETFs by around 20 percentage points annually since its inception in May 2014. Our portfolio of short stocks lost 27.8% since February 2017 (through November 21st) even though the market was up more than 39% during the same period. We just shared a list of 7 short targets in our latest quarterly update .

Unlike the largest US hedge funds that are convinced Dow will soar past 40,000 or the world’s most bearish hedge fund that’s more convinced than ever that a crash is coming, our long-short investment strategy doesn’t rely on bull or bear markets to deliver double digit returns. We only rely on the best performing hedge funds‘ buy/sell signals. Let’s take a look at the key hedge fund action encompassing Consolidated Communications Holdings Inc (NASDAQ:CNSL).

How have hedgies been trading Consolidated Communications Holdings Inc (NASDAQ:CNSL)?

At Q3’s end, a total of 20 of the hedge funds tracked by Insider Monkey held long positions in this stock, a change of 43% from one quarter earlier. By comparison, 10 hedge funds held shares or bullish call options in CNSL a year ago. With the smart money’s capital changing hands, there exists a few noteworthy hedge fund managers who were increasing their stakes meaningfully (or already accumulated large positions). 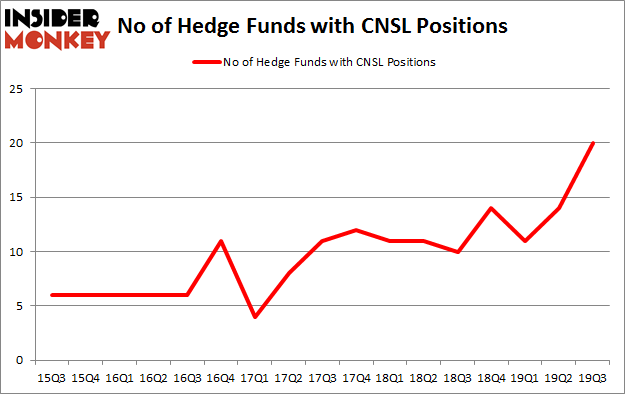 According to publicly available hedge fund and institutional investor holdings data compiled by Insider Monkey, Driehaus Capital, managed by Richard Driehaus, holds the biggest position in Consolidated Communications Holdings Inc (NASDAQ:CNSL). Driehaus Capital has a $5 million position in the stock, comprising 0.2% of its 13F portfolio. The second most bullish fund manager is Peter Rathjens, Bruce Clarke and John Campbell of Arrowstreet Capital, with a $4.5 million position; the fund has less than 0.1%% of its 13F portfolio invested in the stock. Other members of the smart money with similar optimism include Israel Englander’s Millennium Management, Paul Marshall and Ian Wace’s Marshall Wace and Peter Muller’s PDT Partners. In terms of the portfolio weights assigned to each position Driehaus Capital allocated the biggest weight to Consolidated Communications Holdings Inc (NASDAQ:CNSL), around 0.16% of its 13F portfolio. Aequim Alternative Investments is also relatively very bullish on the stock, earmarking 0.08 percent of its 13F equity portfolio to CNSL.

With a general bullishness amongst the heavyweights, some big names have been driving this bullishness. Marshall Wace, managed by Paul Marshall and Ian Wace, established the largest position in Consolidated Communications Holdings Inc (NASDAQ:CNSL). Marshall Wace had $2 million invested in the company at the end of the quarter. Jonathan Soros’s JS Capital also initiated a $0.4 million position during the quarter. The other funds with brand new CNSL positions are Michael Gelband’s ExodusPoint Capital, Michael Platt and William Reeves’s BlueCrest Capital Mgmt., Renaissance Technologies.

As you can see these stocks had an average of 7 hedge funds with bullish positions and the average amount invested in these stocks was $61 million. That figure was $20 million in CNSL’s case. Care.com Inc (NYSE:CRCM) is the most popular stock in this table. On the other hand P.A.M. Transportation Services, Inc. (NASDAQ:PTSI) is the least popular one with only 1 bullish hedge fund positions. Compared to these stocks Consolidated Communications Holdings Inc (NASDAQ:CNSL) is more popular among hedge funds. Our calculations showed that top 20 most popular stocks among hedge funds returned 37.4% in 2019 through the end of November and outperformed the S&P 500 ETF (SPY) by 9.9 percentage points. Unfortunately CNSL wasn’t nearly as popular as these 20 stocks and hedge funds that were betting on CNSL were disappointed as the stock returned -23.7% during the first two months of the fourth quarter and underperformed the market. If you are interested in investing in large cap stocks with huge upside potential, you should check out the top 20 most popular stocks among hedge funds as 70 percent of these stocks already outperformed the market in Q4.