Hedge Funds Have Never Been This Bullish On Companhia Brasileira de Distrib. (CBD)

The government requires hedge funds and wealthy investors that crossed the $100 million equity holdings threshold are required to file a report that shows their positions at the end of every quarter. Even though it isn’t the intention, these filings level the playing field for ordinary investors. The latest round of 13F filings disclosed the funds’ positions on December 31. We at Insider Monkey have made an extensive database of nearly 750 of those elite funds and prominent investors’ filings. In this article, we analyze how these elite funds and prominent investors traded Companhia Brasileira de Distrib. (NYSE:CBD) based on those filings.

Is Companhia Brasileira de Distrib. (NYSE:CBD) a bargain? Prominent investors are becoming more confident. The number of long hedge fund bets went up by 3 recently. Overall hedge fund sentiment towards the stock is at its all time high.

What does the smart money think about Companhia Brasileira de Distrib. (NYSE:CBD)?

At the end of the fourth quarter, a total of 13 of the hedge funds tracked by Insider Monkey were bullish on this stock, a change of 30% from one quarter earlier. The graph below displays the number of hedge funds with bullish position in CBD over the last 14 quarters. With hedgies’ positions undergoing their usual ebb and flow, there exists an “upper tier” of noteworthy hedge fund managers who were adding to their stakes substantially (or already accumulated large positions). 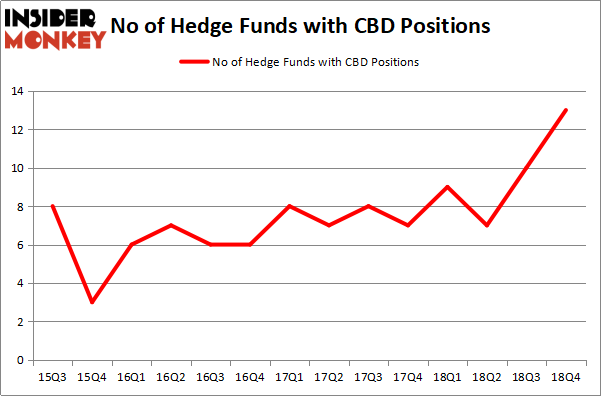 More specifically, Fisher Asset Management was the largest shareholder of Companhia Brasileira de Distrib. (NYSE:CBD), with a stake worth $24 million reported as of the end of September. Trailing Fisher Asset Management was Marshall Wace LLP, which amassed a stake valued at $12.3 million. Capital Growth Management, Prince Street Capital Management, and Renaissance Technologies were also very fond of the stock, giving the stock large weights in their portfolios.

With a general bullishness amongst the heavyweights, key money managers have jumped into Companhia Brasileira de Distrib. (NYSE:CBD) headfirst. Capital Growth Management, managed by Ken Heebner, initiated the biggest position in Companhia Brasileira de Distrib. (NYSE:CBD). Capital Growth Management had $8.5 million invested in the company at the end of the quarter. David Halpert’s Prince Street Capital Management also made a $7.8 million investment in the stock during the quarter. The other funds with new positions in the stock are David Kowitz and Sheldon Kasowitz’s Indus Capital, John Overdeck and David Siegel’s Two Sigma Advisors, and Matthew Tewksbury’s Stevens Capital Management.

As you can see these stocks had an average of 32.5 hedge funds with bullish positions and the average amount invested in these stocks was $662 million. That figure was $79 million in CBD’s case. EnCana Corporation (NYSE:ECA) is the most popular stock in this table. On the other hand Kirkland Lake Gold Ltd. (NYSE:KL) is the least popular one with only 23 bullish hedge fund positions. Compared to these stocks Companhia Brasileira de Distrib. (NYSE:CBD) is even less popular than KL. Our calculations showed that the top 15 most popular stocks among hedge funds returned 21.3% year-to-date through April 8th and outperformed the S&P 500 ETF (SPY) by more than 5 percentage points. Hedge funds were also right about betting on CBD, though not to the same extent, as the stock returned 16.9% and outperformed the market by a small margin.