Hedge Funds Have Never Been This Bullish On Columbia Financial, Inc. (CLBK)

Columbia Financial, Inc. (NASDAQ:CLBK) was in 12 hedge funds’ portfolios at the end of June. CLBK investors should pay attention to an increase in hedge fund interest in recent months. There were 8 hedge funds in our database with CLBK holdings at the end of the previous quarter. Our calculations also showed that CLBK isn’t among the 30 most popular stocks among hedge funds (see the video below). 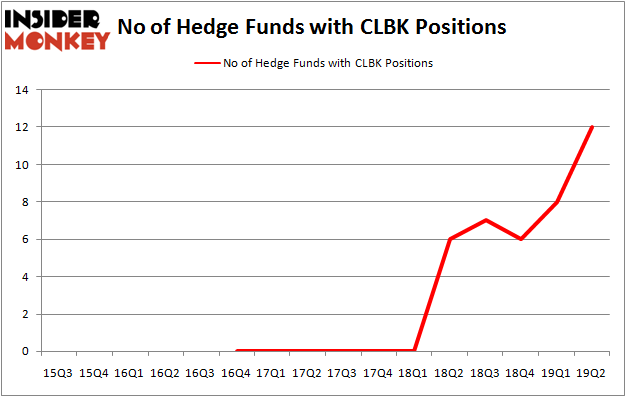 What does smart money think about Columbia Financial, Inc. (NASDAQ:CLBK)?

More specifically, Ancora Advisors was the largest shareholder of Columbia Financial, Inc. (NASDAQ:CLBK), with a stake worth $12.9 million reported as of the end of March. Trailing Ancora Advisors was Seidman Investment Partnership, which amassed a stake valued at $8.2 million. MFP Investors, Renaissance Technologies, and Citadel Investment Group were also very fond of the stock, giving the stock large weights in their portfolios.

As industrywide interest jumped, key money managers were leading the bulls’ herd. Renaissance Technologies, created the most outsized position in Columbia Financial, Inc. (NASDAQ:CLBK). Renaissance Technologies had $2 million invested in the company at the end of the quarter. Peter Muller’s PDT Partners also initiated a $0.3 million position during the quarter. The other funds with brand new CLBK positions are Michael Gelband’s ExodusPoint Capital and D. E. Shaw’s D E Shaw.

As you can see these stocks had an average of 14.25 hedge funds with bullish positions and the average amount invested in these stocks was $124 million. That figure was $33 million in CLBK’s case. Bandwidth Inc. (NASDAQ:BAND) is the most popular stock in this table. On the other hand Chesapeake Lodging Trust (NYSE:CHSP) is the least popular one with only 11 bullish hedge fund positions. Columbia Financial, Inc. (NASDAQ:CLBK) is not the least popular stock in this group but hedge fund interest is still below average. Our calculations showed that top 20 most popular stocks among hedge funds returned 24.4% in 2019 through September 30th and outperformed the S&P 500 ETF (SPY) by 4 percentage points. A small number of hedge funds were also right about betting on CLBK, though not to the same extent, as the stock returned 4.6% during the third quarter and outperformed the market.