Hedge Funds Have Never Been This Bullish On Colfax Corporation (CFX)

In these volatile markets we scrutinize hedge fund filings to get a reading on which direction each stock might be going. How do you pick the next stock to invest in? One way would be to spend days of research browsing through thousands of publicly traded companies. However, an easier way is to look at the stocks that smart money investors are collectively bullish on. Hedge funds and other institutional investors usually invest large amounts of capital and have to conduct due diligence while choosing their next pick. They don’t always get it right, but, on average, their stock picks historically generated strong returns after adjusting for known risk factors. With this in mind, let’s take a look at the recent hedge fund activity surrounding Colfax Corporation (NYSE:CFX).

Colfax Corporation (NYSE:CFX) investors should pay attention to an increase in hedge fund sentiment recently. CFX was in 43 hedge funds’ portfolios at the end of December. There were 31 hedge funds in our database with CFX positions at the end of the previous quarter. Our calculations also showed that CFX isn’t among the 30 most popular stocks among hedge funds (click for Q4 rankings and see the video at the end of this article for Q3 rankings).

We leave no stone unturned when looking for the next great investment idea. For example we recently identified a stock that trades 25% below the net cash on its balance sheet. We read hedge fund investor letters and listen to stock pitches at hedge fund conferences, and go through short-term trade recommendations like this one. We even check out the recommendations of services with hard to believe track records. Our best call in 2020 was shorting the market when S&P 500 was trading at 3150 after realizing the coronavirus pandemic’s significance before most investors. With all of this in mind let’s check out the key hedge fund action regarding Colfax Corporation (NYSE:CFX).

At Q4’s end, a total of 43 of the hedge funds tracked by Insider Monkey were bullish on this stock, a change of 39% from the third quarter of 2019. On the other hand, there were a total of 27 hedge funds with a bullish position in CFX a year ago. With the smart money’s capital changing hands, there exists an “upper tier” of key hedge fund managers who were upping their stakes meaningfully (or already accumulated large positions). 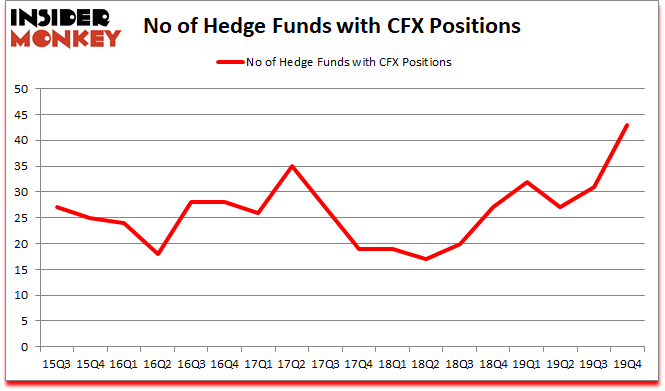 According to publicly available hedge fund and institutional investor holdings data compiled by Insider Monkey, Amy Minella’s Cardinal Capital has the number one position in Colfax Corporation (NYSE:CFX), worth close to $126.9 million, amounting to 3.9% of its total 13F portfolio. Coming in second is Diamond Hill Capital, managed by Ric Dillon, which holds a $105.5 million position; the fund has 0.5% of its 13F portfolio invested in the stock. Some other members of the smart money with similar optimism include Chuck Royce’s Royce & Associates, Israel Englander’s Millennium Management and Ken Griffin’s Citadel Investment Group. In terms of the portfolio weights assigned to each position Albar Capital allocated the biggest weight to Colfax Corporation (NYSE:CFX), around 6.56% of its 13F portfolio. Wexford Capital is also relatively very bullish on the stock, setting aside 5.55 percent of its 13F equity portfolio to CFX.

Now, some big names have jumped into Colfax Corporation (NYSE:CFX) headfirst. Polar Capital, managed by Brian Ashford-Russell and Tim Woolley, created the biggest position in Colfax Corporation (NYSE:CFX). Polar Capital had $31.6 million invested in the company at the end of the quarter. Javier Velazquez’s Albar Capital also made a $15.1 million investment in the stock during the quarter. The other funds with new positions in the stock are D. E. Shaw’s D E Shaw, Richard Driehaus’s Driehaus Capital, and Louis Bacon’s Moore Global Investments.

As you can see these stocks had an average of 31.25 hedge funds with bullish positions and the average amount invested in these stocks was $496 million. That figure was $904 million in CFX’s case. Perspecta Inc. (NYSE:PRSP) is the most popular stock in this table. On the other hand YY Inc (NASDAQ:YY) is the least popular one with only 23 bullish hedge fund positions. Colfax Corporation (NYSE:CFX) is not the most popular stock in this group but hedge fund interest is still above average. This is a slightly positive signal but we’d rather spend our time researching stocks that hedge funds are piling on. Our calculations showed that top 20 most popular stocks among hedge funds returned 41.3% in 2019 and outperformed the S&P 500 ETF (SPY) by 10.1 percentage points. These stocks lost 17.4% in 2020 through March 25th but beat the market by 5.5 percentage points. Unfortunately CFX wasn’t nearly as popular as these 20 stocks and hedge funds that were betting on CFX were disappointed as the stock returned -46.7% during the same time period and underperformed the market. If you are interested in investing in large cap stocks with huge upside potential, you should check out the top 20 most popular stocks among hedge funds as many of these stocks already outperformed the market so far this year.