Is Cisco Systems, Inc. (NASDAQ:CSCO) an excellent investment today? The best stock pickers are in an optimistic mood. The number of bullish hedge fund bets rose by 3 lately. Our calculations also showed that CSCO isn’t among the 30 most popular stocks among hedge funds (click for Q4 rankings and see the video below for Q3 rankings).

To most shareholders, hedge funds are viewed as slow, outdated investment vehicles of the past. While there are greater than 8000 funds with their doors open today, Our researchers look at the leaders of this group, around 850 funds. It is estimated that this group of investors oversee the majority of the hedge fund industry’s total asset base, and by observing their top equity investments, Insider Monkey has uncovered various investment strategies that have historically defeated the broader indices. Insider Monkey’s flagship short hedge fund strategy outpaced the S&P 500 short ETFs by around 20 percentage points per year since its inception in March 2017. Our portfolio of short stocks lost 35.3% since February 2017 (through March 3rd) even though the market was up more than 35% during the same period. We just shared a list of 7 short targets in our latest quarterly update .

We leave no stone unturned when looking for the next great investment idea. For example Europe is set to become the world’s largest cannabis market, so we check out this European marijuana stock pitch. We read hedge fund investor letters and listen to stock pitches at hedge fund conferences, and and go through short-term trade recommendations like this one. We even check out the recommendations of services with hard to believe track records. In January, we recommended a long position in one of the most shorted stocks in the market, and that stock returned more than 50% despite the large losses in the market since our recommendation. Now let’s take a peek at the key hedge fund action surrounding Cisco Systems, Inc. (NASDAQ:CSCO). 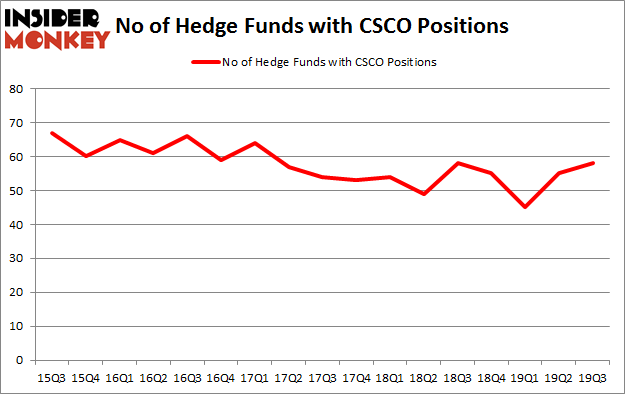 Among these funds, Fisher Asset Management held the most valuable stake in Cisco Systems, Inc. (NASDAQ:CSCO), which was worth $1456.4 million at the end of the third quarter. On the second spot was AQR Capital Management which amassed $578.6 million worth of shares. Two Sigma Advisors, D E Shaw, and Adage Capital Management were also very fond of the stock, becoming one of the largest hedge fund holders of the company. In terms of the portfolio weights assigned to each position Bronson Point Partners allocated the biggest weight to Cisco Systems, Inc. (NASDAQ:CSCO), around 12.47% of its 13F portfolio. Antipodes Partners is also relatively very bullish on the stock, designating 5.52 percent of its 13F equity portfolio to CSCO.

As industrywide interest jumped, some big names have been driving this bullishness. Bronson Point Partners, managed by Larry Foley and Paul Farrell, assembled the largest position in Cisco Systems, Inc. (NASDAQ:CSCO). Bronson Point Partners had $22.2 million invested in the company at the end of the quarter. Anand Parekh’s Alyeska Investment Group also made a $21.1 million investment in the stock during the quarter. The other funds with brand new CSCO positions are Dmitry Balyasny’s Balyasny Asset Management, Michael Rockefeller and Karl Kroeker’s Woodline Partners, and Bernard Selz’s Selz Capital.

As you can see these stocks had an average of 62.75 hedge funds with bullish positions and the average amount invested in these stocks was $4487 million. That figure was $4030 million in CSCO’s case. Citigroup Inc. (NYSE:C) is the most popular stock in this table. On the other hand Toyota Motor Corporation (NYSE:TM) is the least popular one with only 12 bullish hedge fund positions. Cisco Systems, Inc. (NASDAQ:CSCO) is not the most popular stock in this group but hedge fund interest is still above average. This is a slightly positive signal but we’d rather spend our time researching stocks that hedge funds are piling on. Our calculations showed that top 20 most popular stocks among hedge funds returned 41.3% in 2019 and outperformed the S&P 500 ETF (SPY) by 10.1 percentage points. These stocks also gained 0.1% in 2020 through March 2nd and beat the market by 4.1 percentage points. Unfortunately CSCO wasn’t nearly as popular as these 20 stocks and hedge funds that were betting on CSCO were disappointed as the stock returned -13.5% during the same time period and underperformed the market. If you are interested in investing in large cap stocks with huge upside potential, you should check out the top 20 most popular stocks among hedge funds as many of these stocks already outperformed the market so far this year.