The first quarter was a breeze as Powell pivoted, and China seemed eager to reach a deal with Trump. Both the S&P 500 and Russell 2000 delivered very strong gains as a result, with the Russell 2000, which is composed of smaller companies, outperforming the large-cap stocks slightly during the first quarter. Unfortunately sentiment shifted in May and August as this time China pivoted and Trump put more pressure on China by increasing tariffs. Hedge funds’ top 20 stock picks performed spectacularly in this volatile environment. These stocks delivered a total gain of 24.4% through September 30th, vs. a gain of 20.4% for the S&P 500 ETF. In this article we will look at how this market volatility affected the sentiment of hedge funds towards Ciena Corporation (NASDAQ:CIEN), and what that likely means for the prospects of the company and its stock.

Is Ciena Corporation (NASDAQ:CIEN) a buy, sell, or hold? Hedge funds are becoming hopeful. The number of long hedge fund positions inched up by 6 lately. Our calculations also showed that CIEN isn’t among the 30 most popular stocks among hedge funds (see the video below).

What does smart money think about Ciena Corporation (NASDAQ:CIEN)?

At Q2’s end, a total of 36 of the hedge funds tracked by Insider Monkey held long positions in this stock, a change of 20% from one quarter earlier. On the other hand, there were a total of 18 hedge funds with a bullish position in CIEN a year ago. With hedge funds’ positions undergoing their usual ebb and flow, there exists a select group of notable hedge fund managers who were increasing their holdings considerably (or already accumulated large positions). 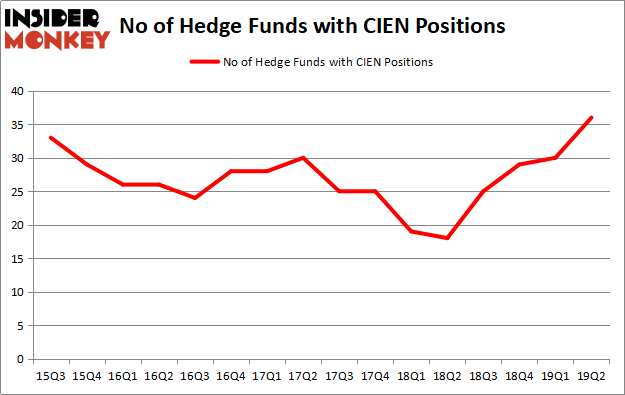 As aggregate interest increased, some big names have been driving this bullishness. Holocene Advisors, managed by Brandon Haley, initiated the most valuable position in Ciena Corporation (NASDAQ:CIEN). Holocene Advisors had $53.4 million invested in the company at the end of the quarter. Marcelo Desio’s Lucha Capital Management also initiated a $16.9 million position during the quarter. The following funds were also among the new CIEN investors: David Harding’s Winton Capital Management, Will Graves’s Boardman Bay Capital Management, and Louis Navellier’s Navellier & Associates.