The first quarter was a breeze as Powell pivoted, and China seemed eager to reach a deal with Trump. Both the S&P 500 and Russell 2000 delivered very strong gains as a result, with the Russell 2000, which is composed of smaller companies, outperforming the large-cap stocks slightly during the first quarter. Unfortunately sentiment shifted in May as this time China pivoted and Trump put more pressure on China by increasing tariffs. Hedge funds’ top 20 stock picks performed spectacularly in this volatile environment. These stocks delivered a total gain of 18.7% through May 30th, vs. a gain of 12.1% for the S&P 500 ETF. In this article we will look at how this market volatility affected the sentiment of hedge funds towards Churchill Downs Incorporated (NASDAQ:CHDN), and what that likely means for the prospects of the company and its stock.

Churchill Downs Incorporated (NASDAQ:CHDN) was in 29 hedge funds’ portfolios at the end of the first quarter of 2019. CHDN investors should pay attention to an increase in hedge fund interest in recent months. There were 26 hedge funds in our database with CHDN positions at the end of the previous quarter. Our calculations also showed that chdn isn’t among the 30 most popular stocks among hedge funds.

To the average investor there are several formulas stock market investors use to analyze their stock investments. Some of the best formulas are hedge fund and insider trading sentiment. We have shown that, historically, those who follow the top picks of the elite investment managers can outperform the market by a very impressive amount (see the details here).

At Q1’s end, a total of 29 of the hedge funds tracked by Insider Monkey held long positions in this stock, a change of 12% from the fourth quarter of 2018. Below, you can check out the change in hedge fund sentiment towards CHDN over the last 15 quarters. With hedgies’ positions undergoing their usual ebb and flow, there exists an “upper tier” of key hedge fund managers who were boosting their stakes considerably (or already accumulated large positions). 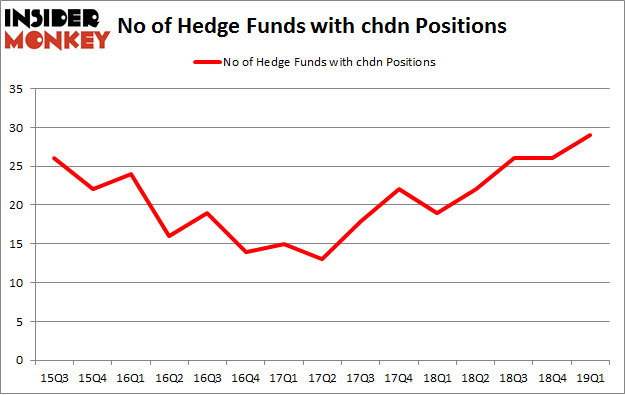 Among these funds, PAR Capital Management held the most valuable stake in Churchill Downs Incorporated (NASDAQ:CHDN), which was worth $194.6 million at the end of the first quarter. On the second spot was Balyasny Asset Management which amassed $64.3 million worth of shares. Moreover, Citadel Investment Group, GAMCO Investors, and Hudson Way Capital Management were also bullish on Churchill Downs Incorporated (NASDAQ:CHDN), allocating a large percentage of their portfolios to this stock.

As aggregate interest increased, specific money managers have been driving this bullishness. Millennium Management, managed by Israel Englander, initiated the biggest position in Churchill Downs Incorporated (NASDAQ:CHDN). Millennium Management had $18.1 million invested in the company at the end of the quarter. Doug Gordon, Jon Hilsabeck and Don Jabro’s Shellback Capital also made a $12.2 million investment in the stock during the quarter. The other funds with new positions in the stock are Sara Nainzadeh’s Centenus Global Management, Matthew Hulsizer’s PEAK6 Capital Management, and Jeffrey Talpins’s Element Capital Management.

As you can see these stocks had an average of 18.75 hedge funds with bullish positions and the average amount invested in these stocks was $294 million. That figure was $520 million in CHDN’s case. Umpqua Holdings Corp (NASDAQ:UMPQ) is the most popular stock in this table. On the other hand Graham Holdings Co (NYSE:GHC) is the least popular one with only 15 bullish hedge fund positions. Compared to these stocks Churchill Downs Incorporated (NASDAQ:CHDN) is more popular among hedge funds. Our calculations showed that top 20 most popular stocks among hedge funds returned 1.9% in Q2 through May 30th and outperformed the S&P 500 ETF (SPY) by more than 3 percentage points. Hedge funds were also right about betting on CHDN as the stock returned 6.8% during the same period and outperformed the market by an even larger margin. Hedge funds were clearly right about piling into this stock relative to other stocks with similar market capitalizations.