Hedge Funds Have Never Been This Bullish On Carvana Co. (CVNA)

Although the masses and most of the financial media blame hedge funds for their exorbitant fee structure and disappointing performance, these investors have proved to have great stock picking abilities over the years (that’s why their assets under management continue to swell). We believe hedge fund sentiment should serve as a crucial tool of an individual investor’s stock selection process, as it may offer great insights of how the brightest minds of the finance industry feel about specific stocks. After all, these people have access to smartest analysts and expensive data/information sources that individual investors can’t match. So should one consider investing in Carvana Co. (NYSE:CVNA)? The smart money sentiment can provide an answer to this question.

Carvana Co. (NYSE:CVNA) has seen an increase in enthusiasm from smart money in recent months. Our calculations also showed that CVNA isn’t among the 30 most popular stocks among hedge funds. 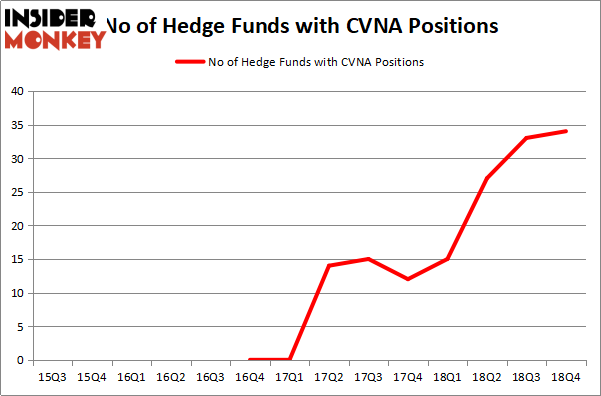 The largest stake in Carvana Co. (NYSE:CVNA) was held by Spruce House Investment Management, which reported holding $179.9 million worth of stock at the end of December. It was followed by CAS Investment Partners with a $70.9 million position. Other investors bullish on the company included Goodnow Investment Group, 683 Capital Partners, and Melvin Capital Management.

As aggregate interest increased, key hedge funds have been driving this bullishness. Nantahala Capital Management, managed by Wilmot B. Harkey and Daniel Mack, created the most valuable call position in Carvana Co. (NYSE:CVNA). Nantahala Capital Management had $47.4 million invested in the company at the end of the quarter. Jonathan Auerbach’s Hound Partners also made a $43.5 million investment in the stock during the quarter. The following funds were also among the new CVNA investors: Bruce Emery’s Greenvale Capital, Andrew Bellas’s General Equity Partners, and Israel Englander’s Millennium Management.

As you can see these stocks had an average of 17.5 hedge funds with bullish positions and the average amount invested in these stocks was $179 million. That figure was $791 million in CVNA’s case. Alcoa Corporation (NYSE:AA) is the most popular stock in this table. On the other hand Aurora Cannabis Inc. (NYSE:ACB) is the least popular one with only 9 bullish hedge fund positions. Compared to these stocks Carvana Co. (NYSE:CVNA) is more popular among hedge funds. Our calculations showed that top 15 most popular stocks) among hedge funds returned 24.2% through April 22nd and outperformed the S&P 500 ETF (SPY) by more than 7 percentage points. Hedge funds were also right about betting on CVNA as the stock returned 99.9% and outperformed the market by an even larger margin. Hedge funds were clearly right about piling into this stock relative to other stocks with similar market capitalizations.