Hedge Funds Have Never Been This Bullish On CareDx, Inc. (CDNA)

Before we spend days researching a stock idea we’d like to take a look at how hedge funds and billionaire investors recently traded that stock. S&P 500 Index ETF (SPY) lost 13.5% in the fourth quarter. Seven out of 11 industry groups in the S&P 500 Index were down more than 20% from their 52-week highs at the trough of the stock market crash. The average return of a randomly picked stock in the index was even worse. This means you (or a monkey throwing a dart) have less than an even chance of beating the market by randomly picking a stock. On the other hand, the top 15 most popular S&P 500 stocks among hedge funds not only recouped their Q4 losses but also outperformed the index by more than 3 percentage points. In this article, we will take a look at what hedge funds think about CareDx, Inc. (NASDAQ:CDNA).

CareDx, Inc. (NASDAQ:CDNA) investors should be aware of an increase in hedge fund interest of late. CDNA was in 22 hedge funds’ portfolios at the end of December. There were 19 hedge funds in our database with CDNA holdings at the end of the previous quarter. Our calculations also showed that CDNA isn’t among the 30 most popular stocks among hedge funds.

To most investors, hedge funds are assumed to be unimportant, old investment vehicles of yesteryear. While there are over 8000 funds in operation at present, Our experts look at the aristocrats of this group, around 750 funds. These money managers handle the majority of the smart money’s total capital, and by watching their inimitable equity investments, Insider Monkey has revealed a number of investment strategies that have historically outperformed the market. Insider Monkey’s flagship hedge fund strategy exceeded the S&P 500 index by nearly 5 percentage points per annum since its inception in May 2014 through early November 2018. We were able to generate large returns even by identifying short candidates. Our portfolio of short stocks lost 27.5% since February 2017 (through March 12th) even though the market was up nearly 25% during the same period. We just shared a list of 6 short targets in our latest quarterly update and they are already down an average of 6% in less than a month.

What have hedge funds been doing with CareDx, Inc. (NASDAQ:CDNA)? 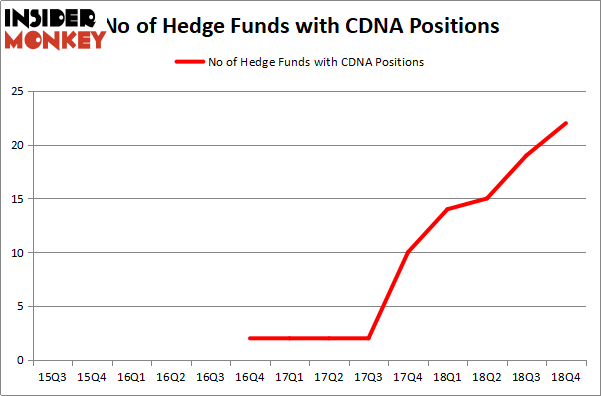 The largest stake in CareDx, Inc. (NASDAQ:CDNA) was held by Iszo Capital, which reported holding $32.5 million worth of stock at the end of December. It was followed by Driehaus Capital with a $19 million position. Other investors bullish on the company included Point72 Asset Management, Two Sigma Advisors, and Royce & Associates.

With a general bullishness amongst the heavyweights, some big names were breaking ground themselves. Iszo Capital, managed by Brian Sheehy, initiated the largest position in CareDx, Inc. (NASDAQ:CDNA). Iszo Capital had $32.5 million invested in the company at the end of the quarter. John Osterweis’s Osterweis Capital Management also made a $5.2 million investment in the stock during the quarter. The other funds with new positions in the stock are Paul Marshall and Ian Wace’s Marshall Wace LLP, Joel Greenblatt’s Gotham Asset Management, and Andrew Feldstein and Stephen Siderow’s Blue Mountain Capital.