Hedge Funds Have Never Been This Bullish On Cannae Holdings, Inc. (CNNE)

In these volatile markets we scrutinize hedge fund filings to get a reading on which direction each stock might be going. Is Cannae Holdings, Inc. (NYSE:CNNE) a good place to invest some of your money right now? We can gain invaluable insight to help us answer that question by studying the investment trends of top investors, who employ world-class Ivy League graduates, who are given immense resources and industry contacts to put their financial expertise to work. The top picks of these firms have historically outperformed the market when we account for known risk factors, making them very valuable investment ideas.

Cannae Holdings, Inc. (NYSE:CNNE) has experienced an increase in enthusiasm from smart money lately. CNNE was in 31 hedge funds’ portfolios at the end of the fourth quarter of 2019. There were 19 hedge funds in our database with CNNE positions at the end of the previous quarter. Our calculations also showed that CNNE isn’t among the 30 most popular stocks among hedge funds (click for Q4 rankings and see the video at the end of this article for Q3 rankings).

To the average investor there are a lot of formulas stock traders put to use to value their holdings. Two of the most underrated formulas are hedge fund and insider trading interest. Our experts have shown that, historically, those who follow the top picks of the elite money managers can trounce the broader indices by a significant amount (see the details here).

We leave no stone unturned when looking for the next great investment idea. For example we recently identified a stock that trades 25% below the net cash on its balance sheet. We read hedge fund investor letters and listen to stock pitches at hedge fund conferences, and go through short-term trade recommendations like this one. We even check out the recommendations of services with hard to believe track records. Our best call in 2020 was shorting the market when S&P 500 was trading at 3150 after realizing the coronavirus pandemic’s significance before most investors. With all of this in mind we’re going to go over the key hedge fund action encompassing Cannae Holdings, Inc. (NYSE:CNNE).

What does smart money think about Cannae Holdings, Inc. (NYSE:CNNE)?

Heading into the first quarter of 2020, a total of 31 of the hedge funds tracked by Insider Monkey were long this stock, a change of 63% from the previous quarter. The graph below displays the number of hedge funds with bullish position in CNNE over the last 18 quarters. With hedge funds’ capital changing hands, there exists an “upper tier” of noteworthy hedge fund managers who were upping their holdings meaningfully (or already accumulated large positions). 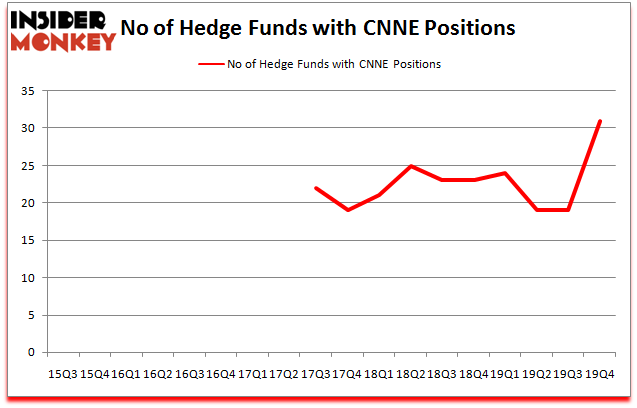 More specifically, Nitorum Capital was the largest shareholder of Cannae Holdings, Inc. (NYSE:CNNE), with a stake worth $133.6 million reported as of the end of September. Trailing Nitorum Capital was Lomas Capital Management, which amassed a stake valued at $55.1 million. Millennium Management, Bayberry Capital Partners, and D E Shaw were also very fond of the stock, becoming one of the largest hedge fund holders of the company. In terms of the portfolio weights assigned to each position Bayberry Capital Partners allocated the biggest weight to Cannae Holdings, Inc. (NYSE:CNNE), around 10.97% of its 13F portfolio. Nitorum Capital is also relatively very bullish on the stock, dishing out 7.48 percent of its 13F equity portfolio to CNNE.

As aggregate interest increased, key money managers have been driving this bullishness. Bayberry Capital Partners, managed by Angela Aldrich, established the most outsized position in Cannae Holdings, Inc. (NYSE:CNNE). Bayberry Capital Partners had $23.7 million invested in the company at the end of the quarter. Jeffrey Talpins’s Element Capital Management also made a $11.2 million investment in the stock during the quarter. The other funds with new positions in the stock are Joseph Samuels’s Islet Management, Paul Marshall and Ian Wace’s Marshall Wace LLP, and Brandon Haley’s Holocene Advisors.

Let’s now take a look at hedge fund activity in other stocks – not necessarily in the same industry as Cannae Holdings, Inc. (NYSE:CNNE) but similarly valued. We will take a look at Element Solutions Inc (NYSE:ESI), Columbia Banking System Inc (NASDAQ:COLB), South State Corporation (NASDAQ:SSB), and Universal Forest Products, Inc. (NASDAQ:UFPI). All of these stocks’ market caps are closest to CNNE’s market cap.

As you can see these stocks had an average of 22.25 hedge funds with bullish positions and the average amount invested in these stocks was $253 million. That figure was $377 million in CNNE’s case. Element Solutions Inc (NYSE:ESI) is the most popular stock in this table. On the other hand Columbia Banking System Inc (NASDAQ:COLB) is the least popular one with only 10 bullish hedge fund positions. Cannae Holdings, Inc. (NYSE:CNNE) is not the most popular stock in this group but hedge fund interest is still above average. Our calculations showed that top 20 most popular stocks among hedge funds returned 41.3% in 2019 and outperformed the S&P 500 ETF (SPY) by 10.1 percentage points. These stocks lost 17.4% in 2020 through March 25th but still beat the market by 5.5 percentage points. Hedge funds were also right about betting on CNNE as the stock returned -16.8% during the first quarter (through March 25th) and outperformed the market. Hedge funds were rewarded for their relative bullishness.