Hedge Funds Have Never Been This Bullish On Brookfield Renewable Partners L.P. (BEP)

Brookfield Renewable Partners L.P. (NYSE:BEP) has experienced an increase in activity from the world’s largest hedge funds of late. BEP was in 4 hedge funds’ portfolios at the end of June. There were 3 hedge funds in our database with BEP positions at the end of the previous quarter. Our calculations also showed that BEP isn’t among the 30 most popular stocks among hedge funds (see the video below).

What have hedge funds been doing with Brookfield Renewable Partners L.P. (NYSE:BEP)?

At Q2’s end, a total of 4 of the hedge funds tracked by Insider Monkey were long this stock, a change of 33% from the first quarter of 2019. On the other hand, there were a total of 2 hedge funds with a bullish position in BEP a year ago. With hedge funds’ capital changing hands, there exists an “upper tier” of notable hedge fund managers who were increasing their stakes substantially (or already accumulated large positions). 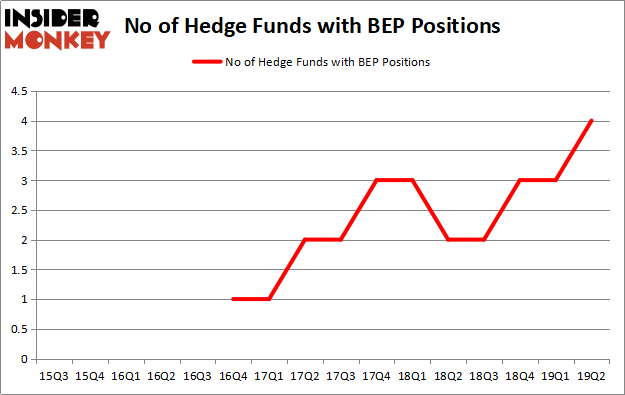 According to Insider Monkey’s hedge fund database, Ecofin Ltd, managed by Bernard Lambilliotte, holds the most valuable position in Brookfield Renewable Partners L.P. (NYSE:BEP). Ecofin Ltd has a $5 million position in the stock, comprising 2.5% of its 13F portfolio. Coming in second is Renaissance Technologies which holds a $1.1 million position; less than 0.1%% of its 13F portfolio is allocated to the company. Some other members of the smart money that hold long positions encompass George Zweig, Shane Haas and Ravi Chander’s Signition LP, and Paul Marshall and Ian Wace’s Marshall Wace LLP.

Now, some big names have been driving this bullishness. Ecofin Ltd, managed by Bernard Lambilliotte, created the biggest position in Brookfield Renewable Partners L.P. (NYSE:BEP). Ecofin Ltd had $5 million invested in the company at the end of the quarter. Paul Marshall and Ian Wace’s Marshall Wace LLP also initiated a $0.7 million position during the quarter.

As you can see these stocks had an average of 20 hedge funds with bullish positions and the average amount invested in these stocks was $553 million. That figure was $8 million in BEP’s case. Owens Corning (NYSE:OC) is the most popular stock in this table. On the other hand Dr. Reddy’s Laboratories Limited (NYSE:RDY) is the least popular one with only 11 bullish hedge fund positions. Compared to these stocks Brookfield Renewable Partners L.P. (NYSE:BEP) is even less popular than RDY. Hedge funds clearly dropped the ball on BEP as the stock delivered strong returns, though hedge funds’ consensus picks still generated respectable returns. Our calculations showed that top 20 most popular stocks among hedge funds returned 24.4% in 2019 through September 30th and outperformed the S&P 500 ETF (SPY) by 4 percentage points. A small number of hedge funds were also right about betting on BEP as the stock returned 19.1% during the third quarter and outperformed the market by an even larger margin.

Genworth Financial Inc (GNW): These Hedge Funds Cashed Out Too Early
Monthly Newsletter Strategy
Download a free copy of our newsletter and see the details inside!
Hedge Fund Resource Center
Related News
11 Largest Auto Insurance Companies In The US In 2019 10 Poorest Cities in America in 2019 8 Lowest Tar and Nicotine Cigarette Brands in 2019
Billionaire Hedge Funds