Blueprint Medicines Corporation (NASDAQ:BPMC) investors should pay attention to an increase in enthusiasm from smart money in recent months. Our calculations also showed that BPMC isn’t among the 30 most popular stocks among hedge funds. 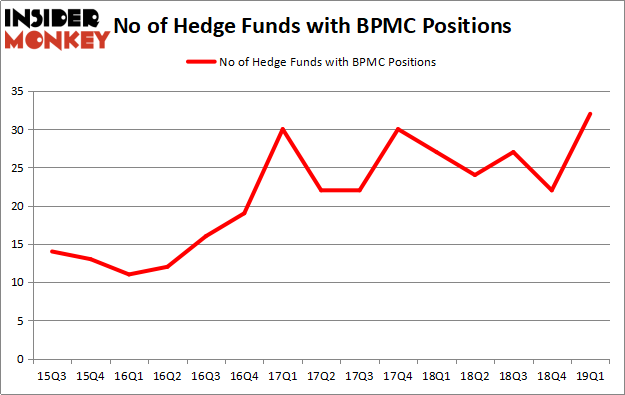 As you can see these stocks had an average of 19.25 hedge funds with bullish positions and the average amount invested in these stocks was $311 million. That figure was $632 million in BPMC’s case. Sinclair Broadcast Group, Inc. (NASDAQ:SBGI) is the most popular stock in this table. On the other hand Hancock Whitney Corporation (NASDAQ:HWC) is the least popular one with only 15 bullish hedge fund positions. Compared to these stocks Blueprint Medicines Corporation (NASDAQ:BPMC) is more popular among hedge funds. Our calculations showed that top 20 most popular stocks among hedge funds returned 1.9% in Q2 through May 30th and outperformed the S&P 500 ETF (SPY) by more than 3 percentage points. Unfortunately BPMC wasn’t nearly as popular as these 20 stocks and hedge funds that were betting on BPMC were disappointed as the stock returned -2.3% during the same period and underperformed the market. If you are interested in investing in large cap stocks with huge upside potential, you should check out the top 20 most popular stocks among hedge funds as 13 of these stocks already outperformed the market in Q2.