Is Biohaven Pharmaceutical Holding Company Ltd. (NYSE:BHVN) a good bet right now? We like to analyze hedge fund sentiment before doing days of in-depth research. We do so because hedge funds and other elite investors have numerous Ivy League graduates, expert network advisers, and supply chain tipsters working or consulting for them. There is not a shortage of news stories covering failed hedge fund investments and it is a fact that hedge funds’ picks don’t beat the market 100% of the time, but their consensus picks have historically done very well and have outperformed the market after adjusting for risk.

Biohaven Pharmaceutical Holding Company Ltd. (NYSE:BHVN) investors should be aware of an increase in hedge fund interest of late. Our calculations also showed that bhvn isn’t among the 30 most popular stocks among hedge funds.

If you’d ask most stock holders, hedge funds are seen as slow, old investment vehicles of years past. While there are more than 8000 funds in operation at present, Our researchers hone in on the moguls of this group, approximately 750 funds. It is estimated that this group of investors shepherd bulk of the hedge fund industry’s total capital, and by tailing their matchless picks, Insider Monkey has formulated a number of investment strategies that have historically outstripped the S&P 500 index. Insider Monkey’s flagship hedge fund strategy defeated the S&P 500 index by nearly 5 percentage points per annum since its inception in May 2014 through early November 2018. We were able to generate large returns even by identifying short candidates. Our portfolio of short stocks lost 27.5% since February 2017 (through March 12th) even though the market was up nearly 25% during the same period. We just shared a list of 6 short targets in our latest quarterly update and they are already down an average of 6% in less than a month. 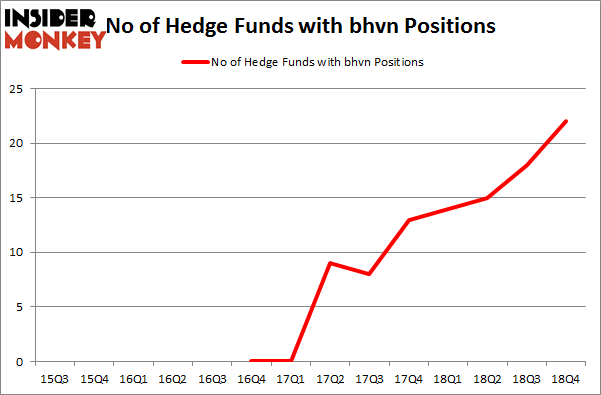 The largest stake in Biohaven Pharmaceutical Holding Company Ltd. (NYSE:BHVN) was held by Vivo Capital, which reported holding $67.1 million worth of stock at the end of December. It was followed by Citadel Investment Group with a $34.7 million position. Other investors bullish on the company included Samlyn Capital, Rubric Capital Management, and Knoll Capital Management.

As industrywide interest jumped, key money managers have been driving this bullishness. Vivo Capital, managed by Albert Cha and Frank Kung, established the most outsized position in Biohaven Pharmaceutical Holding Company Ltd. (NYSE:BHVN). Vivo Capital had $67.1 million invested in the company at the end of the quarter. David Rosen’s Rubric Capital Management also made a $30.1 million investment in the stock during the quarter. The other funds with new positions in the stock are Phill Gross and Robert Atchinson’s Adage Capital Management, Benjamin A. Smith’s Laurion Capital Management, and Brian Ashford-Russell and Tim Woolley’s Polar Capital.

As you can see these stocks had an average of 6.75 hedge funds with bullish positions and the average amount invested in these stocks was $30 million. That figure was $325 million in BHVN’s case. BancFirst Corporation (NASDAQ:BANF) is the most popular stock in this table. On the other hand BP Midstream Partners LP (NYSE:BPMP) is the least popular one with only 3 bullish hedge fund positions. Compared to these stocks Biohaven Pharmaceutical Holding Company Ltd. (NYSE:BHVN) is more popular among hedge funds. Our calculations showed that top 15 most popular stocks) among hedge funds returned 24.2% through April 22nd and outperformed the S&P 500 ETF (SPY) by more than 7 percentage points. Hedge funds were also right about betting on BHVN as the stock returned 64.6% and outperformed the market by an even larger margin. Hedge funds were clearly right about piling into this stock relative to other stocks with similar market capitalizations.