Biohaven Pharmaceutical Holding Company Ltd. (NYSE:BHVN) was in 38 hedge funds’ portfolios at the end of June. BHVN has experienced an increase in support from the world’s most elite money managers of late. There were 33 hedge funds in our database with BHVN positions at the end of the previous quarter. Our calculations also showed that BHVN isn’t among the 30 most popular stocks among hedge funds (see the video below).

According to most stock holders, hedge funds are assumed to be slow, outdated financial vehicles of yesteryear. While there are greater than 8000 funds in operation at present, Our experts choose to focus on the elite of this club, approximately 750 funds. Most estimates calculate that this group of people shepherd the lion’s share of all hedge funds’ total asset base, and by shadowing their unrivaled investments, Insider Monkey has come up with a number of investment strategies that have historically exceeded Mr. Market. Insider Monkey’s flagship hedge fund strategy beat the S&P 500 index by around 5 percentage points a year since its inception in May 2014. We were able to generate large returns even by identifying short candidates. Our portfolio of short stocks lost 25.7% since February 2017 (through September 30th) even though the market was up more than 33% during the same period. We just shared a list of 10 short targets in our latest quarterly update . 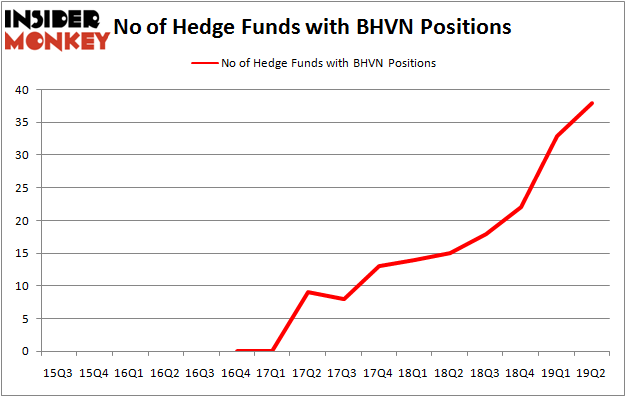 What have hedge funds been doing with Biohaven Pharmaceutical Holding Company Ltd. (NYSE:BHVN)?

At the end of the second quarter, a total of 38 of the hedge funds tracked by Insider Monkey were long this stock, a change of 15% from the previous quarter. Below, you can check out the change in hedge fund sentiment towards BHVN over the last 16 quarters. So, let’s review which hedge funds were among the top holders of the stock and which hedge funds were making big moves.

More specifically, Cormorant Asset Management was the largest shareholder of Biohaven Pharmaceutical Holding Company Ltd. (NYSE:BHVN), with a stake worth $67.9 million reported as of the end of March. Trailing Cormorant Asset Management was Citadel Investment Group, which amassed a stake valued at $56.6 million. Adage Capital Management, Kingdon Capital, and TIG Advisors were also very fond of the stock, giving the stock large weights in their portfolios.

With a general bullishness amongst the heavyweights, some big names have been driving this bullishness. TIG Advisors, managed by Carl Tiedemann and Michael Tiedemann, initiated the most outsized position in Biohaven Pharmaceutical Holding Company Ltd. (NYSE:BHVN). TIG Advisors had $33.2 million invested in the company at the end of the quarter. Bihua Chen’s Cormorant Asset Management also made a $24.1 million investment in the stock during the quarter. The other funds with brand new BHVN positions are Kevin Kotler’s Broadfin Capital, Jeffrey Jay and David Kroin’s Great Point Partners, and Jonathan Barrett and Paul Segal’s Luminus Management.