Our extensive research has shown that imitating the smart money can generate significant returns for retail investors, which is why we track nearly 750 active prominent money managers and analyze their quarterly 13F filings. The stocks that are heavily bought by hedge funds historically outperformed the market, though there is no shortage of high profile failures like hedge funds’ 2018 losses in Facebook and Apple. Let’s take a closer look at what the funds we track think about Berry Petroleum Corporation (NASDAQ:BRY) in this article.

Berry Petroleum Corporation (NASDAQ:BRY) was in 18 hedge funds’ portfolios at the end of June. BRY shareholders have witnessed an increase in support from the world’s most elite money managers recently. There were 16 hedge funds in our database with BRY holdings at the end of the previous quarter. Our calculations also showed that BRY isn’t among the 30 most popular stocks among hedge funds (see the video below).

Today there are a lot of formulas shareholders have at their disposal to grade publicly traded companies. Two of the best formulas are hedge fund and insider trading moves. We have shown that, historically, those who follow the top picks of the top investment managers can trounce the market by a very impressive amount (see the details here). 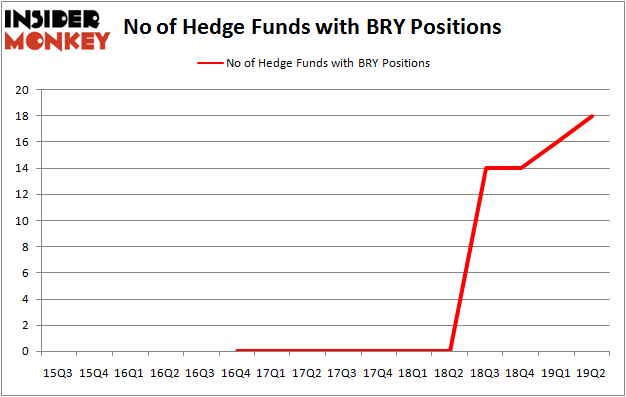 How have hedgies been trading Berry Petroleum Corporation (NASDAQ:BRY)?

At the end of the second quarter, a total of 18 of the hedge funds tracked by Insider Monkey held long positions in this stock, a change of 13% from one quarter earlier. By comparison, 0 hedge funds held shares or bullish call options in BRY a year ago. With hedgies’ sentiment swirling, there exists a select group of key hedge fund managers who were boosting their holdings substantially (or already accumulated large positions).

Among these funds, Oaktree Capital Management held the most valuable stake in Berry Petroleum Corporation (NASDAQ:BRY), which was worth $136.7 million at the end of the second quarter. On the second spot was Venor Capital Management which amassed $21.8 million worth of shares. Moreover, Millennium Management, Deep Basin Capital, and Soros Fund Management were also bullish on Berry Petroleum Corporation (NASDAQ:BRY), allocating a large percentage of their portfolios to this stock.