Hedge Funds Have Never Been This Bullish On Benefitfocus Inc (BNFT)

The elite funds run by legendary investors such as David Tepper and Dan Loeb make hundreds of millions of dollars for themselves and their investors by spending enormous resources doing research on small cap stocks that big investment banks don’t follow. Because of their pay structures, they have strong incentives to do the research necessary to beat the market. That’s why we pay close attention to what they think in small cap stocks. In this article, we take a closer look at Benefitfocus Inc (NASDAQ:BNFT) from the perspective of those elite funds.

Benefitfocus Inc (NASDAQ:BNFT) has seen an increase in activity from the world’s largest hedge funds in recent months. BNFT was in 15 hedge funds’ portfolios at the end of December. There were 12 hedge funds in our database with BNFT holdings at the end of the previous quarter. Our calculations also showed that BNFT isn’t among the 30 most popular stocks among hedge funds.

If you’d ask most market participants, hedge funds are perceived as underperforming, old financial vehicles of yesteryear. While there are more than 8000 funds in operation today, Our experts hone in on the leaders of this group, about 750 funds. These money managers oversee the lion’s share of the smart money’s total asset base, and by keeping track of their top investments, Insider Monkey has uncovered several investment strategies that have historically defeated the broader indices. Insider Monkey’s flagship hedge fund strategy surpassed the S&P 500 index by nearly 5 percentage points a year since its inception in May 2014 through early November 2018. We were able to generate large returns even by identifying short candidates. Our portfolio of short stocks lost 27.5% since February 2017 (through March 12th) even though the market was up nearly 25% during the same period. We just shared a list of 6 short targets in our latest quarterly update and they are already down an average of 6% in less than a month.

What have hedge funds been doing with Benefitfocus Inc (NASDAQ:BNFT)? 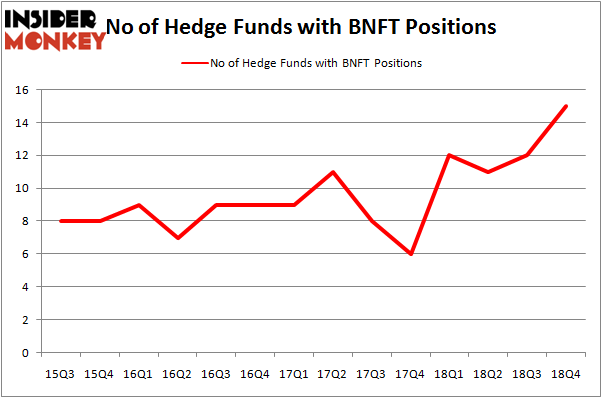 Of the funds tracked by Insider Monkey, Israel Englander’s Millennium Management has the biggest position in Benefitfocus Inc (NASDAQ:BNFT), worth close to $15.5 million, corresponding to less than 0.1%% of its total 13F portfolio. The second most bullish fund manager is Brian Ashford-Russell and Tim Woolley of Polar Capital, with a $13.9 million position; the fund has 0.1% of its 13F portfolio invested in the stock. Some other peers that are bullish comprise D. E. Shaw’s D E Shaw, Steve Cohen’s Point72 Asset Management and John Overdeck and David Siegel’s Two Sigma Advisors.

As you can see these stocks had an average of 18.25 hedge funds with bullish positions and the average amount invested in these stocks was $142 million. That figure was $69 million in BNFT’s case. Callaway Golf Company (NYSE:ELY) is the most popular stock in this table. On the other hand SSR Mining Inc. (NASDAQ:SSRM) is the least popular one with only 12 bullish hedge fund positions. Benefitfocus Inc (NASDAQ:BNFT) is not the least popular stock in this group but hedge fund interest is still below average. This is a slightly negative signal and we’d rather spend our time researching stocks that hedge funds are piling on. Our calculations showed that top 15 most popular stocks) among hedge funds returned 24.2% through April 22nd and outperformed the S&P 500 ETF (SPY) by more than 7 percentage points. Unfortunately BNFT wasn’t nearly as popular as these 15 stock (hedge fund sentiment was quite bearish); BNFT investors were disappointed as the stock returned -13.8% and underperformed the market. If you are interested in investing in large cap stocks with huge upside potential, you should check out the top 15 most popular stocks) among hedge funds as 13 of these stocks already outperformed the market this year.