Hedge Funds Have Never Been This Bullish On Bandwidth Inc. (BAND)

While the market driven by short-term sentiment influenced by uncertainty regarding the future of the interest rate environment in the US, declining oil prices and the trade war with China, many smart money investors kept their optimism regarding the current bull run in the fourth quarter, while still hedging many of their long positions. However, as we know, big investors usually buy stocks with strong fundamentals, which is why we believe we can profit from imitating them. In this article, we are going to take a look at the smart money sentiment surrounding Bandwidth Inc. (NASDAQ:BAND).

Is Bandwidth Inc. (NASDAQ:BAND) undervalued? The best stock pickers are becoming more confident. The number of long hedge fund bets moved up by 3 recently. Our calculations also showed that BAND isn’t among the 30 most popular stocks among hedge funds. BAND was in 19 hedge funds’ portfolios at the end of the fourth quarter of 2018. There were 16 hedge funds in our database with BAND holdings at the end of the previous quarter.

To most traders, hedge funds are viewed as slow, outdated financial vehicles of years past. While there are more than 8000 funds with their doors open today, Our experts hone in on the crème de la crème of this club, around 750 funds. It is estimated that this group of investors direct the majority of the hedge fund industry’s total capital, and by keeping an eye on their unrivaled equity investments, Insider Monkey has figured out a few investment strategies that have historically exceeded the broader indices. Insider Monkey’s flagship hedge fund strategy beat the S&P 500 index by nearly 5 percentage points annually since its inception in May 2014 through early November 2018. We were able to generate large returns even by identifying short candidates. Our portfolio of short stocks lost 27.5% since February 2017 (through March 12th) even though the market was up nearly 25% during the same period. We just shared a list of 6 short targets in our latest quarterly update and they are already down an average of 6% in less than a month.

What does the smart money think about Bandwidth Inc. (NASDAQ:BAND)? 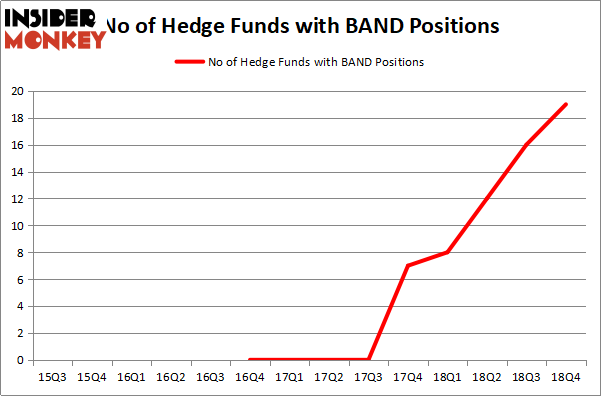 According to publicly available hedge fund and institutional investor holdings data compiled by Insider Monkey, Portolan Capital Management, managed by George McCabe, holds the number one position in Bandwidth Inc. (NASDAQ:BAND). Portolan Capital Management has a $28.5 million position in the stock, comprising 3.5% of its 13F portfolio. The second most bullish fund manager is Jim Simons of Renaissance Technologies, with a $15.6 million position; less than 0.1%% of its 13F portfolio is allocated to the company. Some other professional money managers with similar optimism contain Steve Cohen’s Point72 Asset Management, Richard Driehaus’s Driehaus Capital and Bijan Modanlou, Joseph Bou-Saba, and Jayaveera Kodali’s Alta Park Capital.

As aggregate interest increased, some big names were breaking ground themselves. Point72 Asset Management, managed by Steve Cohen, initiated the largest position in Bandwidth Inc. (NASDAQ:BAND). Point72 Asset Management had $11.4 million invested in the company at the end of the quarter. William Hyatt’s Hudson Way Capital Management also made a $5.3 million investment in the stock during the quarter. The other funds with brand new BAND positions are Andrew Feldstein and Stephen Siderow’s Blue Mountain Capital, Michael Platt and William Reeves’s BlueCrest Capital Mgmt., and Michael Gelband’s ExodusPoint Capital.

As you can see these stocks had an average of 16.5 hedge funds with bullish positions and the average amount invested in these stocks was $112 million. That figure was $103 million in BAND’s case. Denbury Resources Inc. (NYSE:DNR) is the most popular stock in this table. On the other hand U.S. Silica Holdings Inc (NYSE:SLCA) is the least popular one with only 14 bullish hedge fund positions. Bandwidth Inc. (NASDAQ:BAND) is not the most popular stock in this group but hedge fund interest is still above average. Our calculations showed that top 15 most popular stocks) among hedge funds returned 24.2% through April 22nd and outperformed the S&P 500 ETF (SPY) by more than 7 percentage points. Hedge funds were also right about betting on BAND as the stock returned 69.3% and outperformed the market by an even larger margin. Hedge funds were rewarded for their relative bullishness.