Hedge Funds Have Never Been This Bullish On Axsome Therapeutics, Inc. (AXSM)

Is Axsome Therapeutics, Inc. (NASDAQ:AXSM) a good stock to buy right now? We at Insider Monkey like to examine what billionaires and hedge funds think of a company before spending days of research on it. Given their 2 and 20 payment structure, hedge funds have more incentives and resources than the average investor. The funds have access to expert networks and get tips from industry insiders. They also have numerous Ivy League graduates and MBAs. Like everyone else, hedge funds perform miserably at times, but their consensus picks have historically outperformed the market after risk adjustments.

Is Axsome Therapeutics, Inc. (NASDAQ:AXSM) a buy right now? The smart money is becoming hopeful. The number of bullish hedge fund positions moved up by 2 recently. Our calculations also showed that AXSM isn’t among the 30 most popular stocks among hedge funds (see the video below). AXSM was in 16 hedge funds’ portfolios at the end of the second quarter of 2019. There were 14 hedge funds in our database with AXSM holdings at the end of the previous quarter.

At the end of the second quarter, a total of 16 of the hedge funds tracked by Insider Monkey held long positions in this stock, a change of 14% from the previous quarter. The graph below displays the number of hedge funds with bullish position in AXSM over the last 16 quarters. So, let’s examine which hedge funds were among the top holders of the stock and which hedge funds were making big moves. 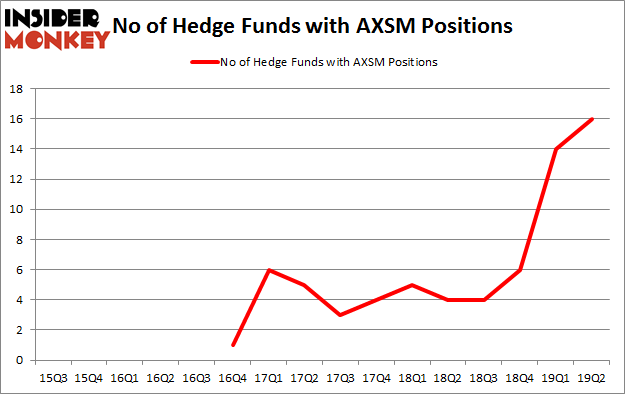 The largest stake in Axsome Therapeutics, Inc. (NASDAQ:AXSM) was held by RA Capital Management, which reported holding $34.5 million worth of stock at the end of March. It was followed by Ghost Tree Capital with a $21.9 million position. Other investors bullish on the company included Baker Bros. Advisors, Millennium Management, and Renaissance Technologies.

As one would reasonably expect, specific money managers were leading the bulls’ herd. Renaissance Technologies initiated the biggest position in Axsome Therapeutics, Inc. (NASDAQ:AXSM). Renaissance Technologies had $6.4 million invested in the company at the end of the quarter. David Cohen and Harold Levy’s Iridian Asset Management also made a $2.4 million investment in the stock during the quarter. The following funds were also among the new AXSM investors: D. E. Shaw’s D E Shaw, Joel Greenblatt’s Gotham Asset Management, and Parvinder Thiara’s Athanor Capital.

As you can see these stocks had an average of 16.25 hedge funds with bullish positions and the average amount invested in these stocks was $145 million. That figure was $106 million in AXSM’s case. WAVE Life Sciences Ltd. (NASDAQ:WVE) is the most popular stock in this table. On the other hand John B. Sanfilippo & Son, Inc. (NASDAQ:JBSS) is the least popular one with only 10 bullish hedge fund positions. Axsome Therapeutics, Inc. (NASDAQ:AXSM) is not the least popular stock in this group but hedge fund interest is still below average. This is a slightly negative signal and we’d rather spend our time researching stocks that hedge funds are piling on. Our calculations showed that top 20 most popular stocks among hedge funds returned 24.4% in 2019 through September 30th and outperformed the S&P 500 ETF (SPY) by 4 percentage points. Unfortunately AXSM wasn’t nearly as popular as these 20 stocks (hedge fund sentiment was quite bearish); AXSM investors were disappointed as the stock returned -21.4% during the third quarter and underperformed the market. If you are interested in investing in large cap stocks with huge upside potential, you should check out the top 20 most popular stocks among hedge funds as many of these stocks already outperformed the market so far in 2019.