Is Avaya Holdings Corp. (NYSE:AVYA) a good place to invest some of your money right now? We can gain invaluable insight to help us answer that question by studying the investment trends of top investors, who employ world-class Ivy League graduates, who are given immense resources and industry contacts to put their financial expertise to work. The top picks of these firms have historically outperformed the market when we account for known risk factors, making them very valuable investment ideas.

Is Avaya Holdings Corp. (NYSE:AVYA) the right investment to pursue these days? Money managers are becoming hopeful. The number of long hedge fund bets inched up by 2 lately. Our calculations also showed that avya isn’t among the 30 most popular stocks among hedge funds.

What have hedge funds been doing with Avaya Holdings Corp. (NYSE:AVYA)?

At Q4’s end, a total of 36 of the hedge funds tracked by Insider Monkey were bullish on this stock, a change of 6% from the second quarter of 2018. On the other hand, there were a total of 35 hedge funds with a bullish position in AVYA a year ago. With hedgies’ positions undergoing their usual ebb and flow, there exists an “upper tier” of notable hedge fund managers who were upping their holdings significantly (or already accumulated large positions). 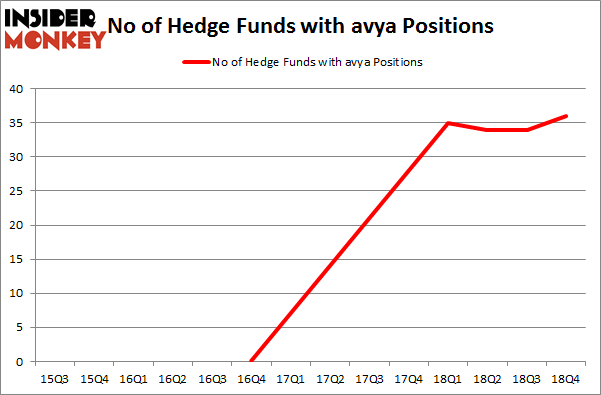 The largest stake in Avaya Holdings Corp. (NYSE:AVYA) was held by Highland Capital Management, which reported holding $50.9 million worth of stock at the end of December. It was followed by Anchorage Advisors with a $48.9 million position. Other investors bullish on the company included Rubric Capital Management, Knighthead Capital, and Point72 Asset Management.

As one would reasonably expect, key hedge funds were leading the bulls’ herd. HPS Investment Partners, managed by Scott Kapnick, established the largest position in Avaya Holdings Corp. (NYSE:AVYA). HPS Investment Partners had $13.5 million invested in the company at the end of the quarter. Vasan Kesavan, Srikumar Kesavan and Sandeep Ramesh’s Meghalaya Partners also made a $5.7 million investment in the stock during the quarter. The other funds with brand new AVYA positions are Paul Marshall and Ian Wace’s Marshall Wace LLP, Cliff Asness’s AQR Capital Management, and Jay Petschek and Steven Major’s Corsair Capital Management.

As you can see these stocks had an average of 13.25 hedge funds with bullish positions and the average amount invested in these stocks was $63 million. That figure was $354 million in AVYA’s case. Universal Forest Products, Inc. (NASDAQ:UFPI) is the most popular stock in this table. On the other hand Forward Air Corporation (NASDAQ:FWRD) is the least popular one with only 11 bullish hedge fund positions. Compared to these stocks Avaya Holdings Corp. (NYSE:AVYA) is more popular among hedge funds. Our calculations showed that top 15 most popular stocks) among hedge funds returned 24.2% through April 22nd and outperformed the S&P 500 ETF (SPY) by more than 7 percentage points. Hedge funds were also right about betting on AVYA as the stock returned 32.6% and outperformed the market by an even larger margin. Hedge funds were clearly right about piling into this stock relative to other stocks with similar market capitalizations.