Hedge funds are not perfect. They have their bad picks just like everyone else. Facebook, a stock hedge funds have loved dearly, lost nearly 40% of its value at one point in 2018. Although hedge funds are not perfect, their consensus picks do deliver solid returns, however. Our data show the top 20 S&P 500 stocks among hedge funds beat the S&P 500 Index by 4 percentage points so far in 2019. Because hedge funds have a lot of resources and their consensus picks do well, we pay attention to what they think. In this article, we analyze what the elite funds think of Avaya Holdings Corp. (NYSE:AVYA).

Avaya Holdings Corp. (NYSE:AVYA) has experienced an increase in activity from the world’s largest hedge funds in recent months. Our calculations also showed that AVYA isn’t among the 30 most popular stocks among hedge funds (see the video below).

What does smart money think about Avaya Holdings Corp. (NYSE:AVYA)? 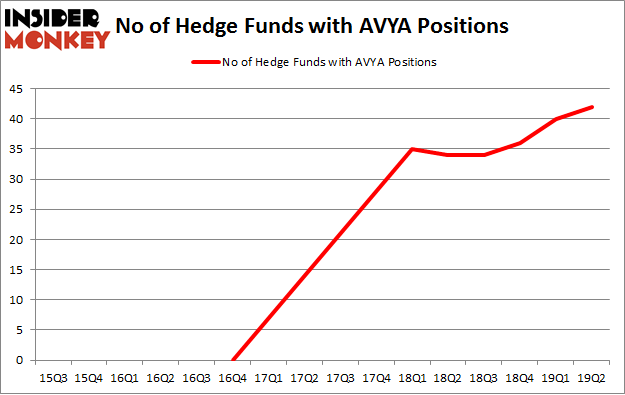 As one would reasonably expect, some big names were breaking ground themselves. Rubric Capital Management, managed by David Rosen, assembled the most valuable call position in Avaya Holdings Corp. (NYSE:AVYA). Rubric Capital Management had $15.2 million invested in the company at the end of the quarter. Glenn Russell Dubin’s Highbridge Capital Management also made a $10.5 million investment in the stock during the quarter. The following funds were also among the new AVYA investors: Ken Griffin’s Citadel Investment Group, Eric Singer’s VIEX Capital Advisors, and Himanshu Gulati’s Antara Capital.

As you can see these stocks had an average of 11.25 hedge funds with bullish positions and the average amount invested in these stocks was $107 million. That figure was $310 million in AVYA’s case. Waddell & Reed Financial, Inc. (NYSE:WDR) is the most popular stock in this table. On the other hand Easterly Government Properties Inc (NYSE:DEA) is the least popular one with only 6 bullish hedge fund positions. Compared to these stocks Avaya Holdings Corp. (NYSE:AVYA) is more popular among hedge funds. Our calculations showed that top 20 most popular stocks among hedge funds returned 24.4% in 2019 through September 30th and outperformed the S&P 500 ETF (SPY) by 4 percentage points. Unfortunately AVYA wasn’t nearly as popular as these 20 stocks and hedge funds that were betting on AVYA were disappointed as the stock returned -14.1% during the third quarter and underperformed the market. If you are interested in investing in large cap stocks with huge upside potential, you should check out the top 20 most popular stocks among hedge funds as many of these stocks already outperformed the market in Q3.