While the market driven by short-term sentiment influenced by the accomodative interest rate environment in the US, increasing oil prices and deteriorating expectations towards the resolution of the trade war with China, many smart money investors kept their cautious approach regarding the current bull run in the second quarter and hedging or reducing many of their long positions. Some fund managers like this one are betting on Dow hitting 40,000 to generate strong returns. However, as we know, big investors usually buy stocks with strong fundamentals that can deliver gains both in bull and bear markets, which is why we believe we can profit from imitating them. In this article, we are going to take a look at the smart money sentiment surrounding American Homes 4 Rent (NYSE:AMH).

American Homes 4 Rent (NYSE:AMH) investors should be aware of an increase in activity from the world’s largest hedge funds recently. AMH was in 25 hedge funds’ portfolios at the end of June. There were 19 hedge funds in our database with AMH positions at the end of the previous quarter. Our calculations also showed that AMH isn’t among the 30 most popular stocks among hedge funds (see the video below). 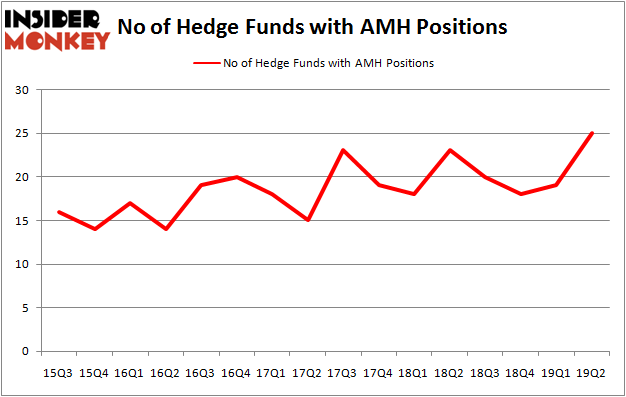 Unlike this former hedge fund manager who is convinced Dow will soar past 40000, our long-short investment strategy doesn’t rely on bull markets to deliver double digit returns. We only rely on hedge fund buy/sell signals. We’re going to analyze the new hedge fund action regarding American Homes 4 Rent (NYSE:AMH).

How have hedgies been trading American Homes 4 Rent (NYSE:AMH)?

Among these funds, Echo Street Capital Management held the most valuable stake in American Homes 4 Rent (NYSE:AMH), which was worth $100 million at the end of the second quarter. On the second spot was Zimmer Partners which amassed $90.6 million worth of shares. Moreover, Citadel Investment Group, AEW Capital Management, and Millennium Management were also bullish on American Homes 4 Rent (NYSE:AMH), allocating a large percentage of their portfolios to this stock.

Consequently, specific money managers have been driving this bullishness. Capital Growth Management, managed by Ken Heebner, established the most outsized position in American Homes 4 Rent (NYSE:AMH). Capital Growth Management had $10.2 million invested in the company at the end of the quarter. Daniel Johnson’s Gillson Capital also made a $6.3 million investment in the stock during the quarter. The other funds with brand new AMH positions are John Overdeck and David Siegel’s Two Sigma Advisors, Mario Gabelli’s GAMCO Investors, and Matthew Tewksbury’s Stevens Capital Management.

As you can see these stocks had an average of 15.5 hedge funds with bullish positions and the average amount invested in these stocks was $226 million. That figure was $454 million in AMH’s case. FLIR Systems, Inc. (NASDAQ:FLIR) is the most popular stock in this table. On the other hand CAE, Inc. (NYSE:CAE) is the least popular one with only 10 bullish hedge fund positions. Compared to these stocks American Homes 4 Rent (NYSE:AMH) is more popular among hedge funds. Our calculations showed that top 20 most popular stocks among hedge funds returned 24.4% in 2019 through September 30th and outperformed the S&P 500 ETF (SPY) by 4 percentage points. Hedge funds were also right about betting on AMH as the stock returned 6.7% during Q3 and outperformed the market by an even larger margin. Hedge funds were clearly right about piling into this stock relative to other stocks with similar market capitalizations.