Hedge Funds Have Never Been This Bullish On Algonquin Power & Utilities Corp. (AQN)

Is Algonquin Power & Utilities Corp. (NYSE:AQN) a bargain? Prominent investors are betting on the stock. The number of bullish hedge fund positions advanced by 3 recently. Our calculations also showed that AQN isn’t among the 30 most popular stocks among hedge funds. AQN was in 9 hedge funds’ portfolios at the end of the fourth quarter of 2018. There were 6 hedge funds in our database with AQN positions at the end of the previous quarter.

What have hedge funds been doing with Algonquin Power & Utilities Corp. (NYSE:AQN)?

Heading into the first quarter of 2019, a total of 9 of the hedge funds tracked by Insider Monkey were bullish on this stock, a change of 50% from the previous quarter. Below, you can check out the change in hedge fund sentiment towards AQN over the last 14 quarters. With hedge funds’ positions undergoing their usual ebb and flow, there exists an “upper tier” of notable hedge fund managers who were increasing their stakes considerably (or already accumulated large positions). 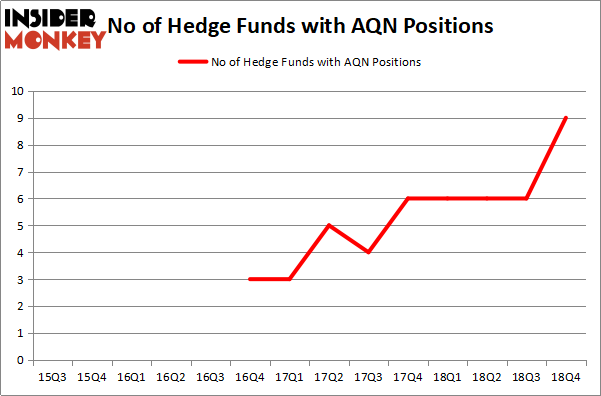 More specifically, Renaissance Technologies was the largest shareholder of Algonquin Power & Utilities Corp. (NYSE:AQN), with a stake worth $12.6 million reported as of the end of September. Trailing Renaissance Technologies was Two Sigma Advisors, which amassed a stake valued at $6.9 million. Zimmer Partners, Signition LP, and D E Shaw were also very fond of the stock, giving the stock large weights in their portfolios.

Consequently, some big names have been driving this bullishness. Two Sigma Advisors, managed by John Overdeck and David Siegel, initiated the most valuable position in Algonquin Power & Utilities Corp. (NYSE:AQN). Two Sigma Advisors had $6.9 million invested in the company at the end of the quarter. Stuart J. Zimmer’s Zimmer Partners also made a $2.9 million investment in the stock during the quarter. The following funds were also among the new AQN investors: Peter Rathjens, Bruce Clarke and John Campbell’s Arrowstreet Capital, Matthew Tewksbury’s Stevens Capital Management, and Cliff Asness’s AQR Capital Management.

As you can see these stocks had an average of 34.25 hedge funds with bullish positions and the average amount invested in these stocks was $699 million. That figure was $25 million in AQN’s case. EQT Corporation (NYSE:EQT) is the most popular stock in this table. On the other hand New Residential Investment Corp (NYSE:NRZ) is the least popular one with only 25 bullish hedge fund positions. Compared to these stocks Algonquin Power & Utilities Corp. (NYSE:AQN) is even less popular than NRZ. Hedge funds dodged a bullet by taking a bearish stance towards AQN. Our calculations showed that the top 15 most popular hedge fund stocks returned 24.2% through April 22nd and outperformed the S&P 500 ETF (SPY) by more than 7 percentage points. Unfortunately AQN wasn’t nearly as popular as these 15 stock (hedge fund sentiment was very bearish); AQN investors were disappointed as the stock returned 15.6% and underperformed the market. If you are interested in investing in large cap stocks with huge upside potential, you should check out the top 15 most popular stocks) among hedge funds as 13 of these stocks already outperformed the market this year.