Hedge Funds Have Never Been This Bullish On ACM Research, Inc. (ACMR)

Hedge fund managers like David Einhorn, Bill Ackman, or Carl Icahn became billionaires through reaping large profits for their investors, which is why piggybacking their stock picks may provide us with significant returns as well. Many hedge funds, like Paul Singer’s Elliott Management, are pretty secretive, but we can still get some insights by analyzing their quarterly 13F filings. One of the most fertile grounds for large abnormal returns is hedge funds’ most popular small-cap picks, which are not so widely followed and often trade at a discount to their intrinsic value. In this article we will check out hedge fund activity in another small-cap stock: ACM Research, Inc. (NASDAQ:ACMR).

ACM Research, Inc. (NASDAQ:ACMR) investors should pay attention to an increase in activity from the world’s largest hedge funds of late. ACMR was in 7 hedge funds’ portfolios at the end of June. There were 2 hedge funds in our database with ACMR positions at the end of the previous quarter. Our calculations also showed that ACMR isn’t among the 30 most popular stocks among hedge funds (see the video below).

According to most traders, hedge funds are assumed to be unimportant, old investment tools of yesteryear. While there are greater than 8000 funds trading today, We hone in on the crème de la crème of this group, around 750 funds. These hedge fund managers have their hands on the majority of the smart money’s total capital, and by paying attention to their unrivaled equity investments, Insider Monkey has identified several investment strategies that have historically defeated the broader indices. Insider Monkey’s flagship hedge fund strategy outperformed the S&P 500 index by around 5 percentage points annually since its inception in May 2014. We were able to generate large returns even by identifying short candidates. Our portfolio of short stocks lost 25.7% since February 2017 (through September 30th) even though the market was up more than 33% during the same period. We just shared a list of 10 short targets in our latest quarterly update .

What have hedge funds been doing with ACM Research, Inc. (NASDAQ:ACMR)?

At the end of the second quarter, a total of 7 of the hedge funds tracked by Insider Monkey were bullish on this stock, a change of 250% from the previous quarter. By comparison, 0 hedge funds held shares or bullish call options in ACMR a year ago. With hedgies’ capital changing hands, there exists a few notable hedge fund managers who were upping their stakes considerably (or already accumulated large positions). 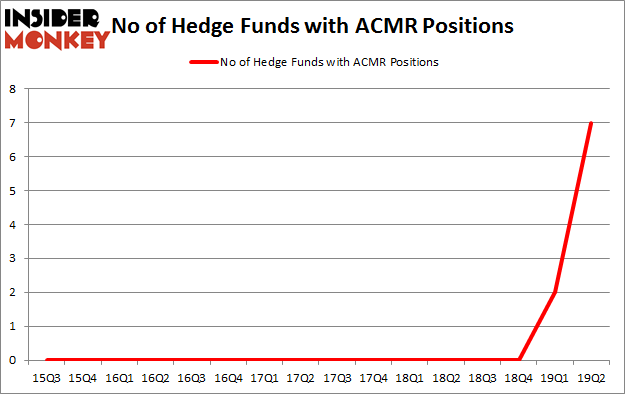 Among these funds, Millennium Management held the most valuable stake in ACM Research, Inc. (NASDAQ:ACMR), which was worth $3 million at the end of the second quarter. On the second spot was Arrowstreet Capital which amassed $1.4 million worth of shares. Moreover, Renaissance Technologies, Citadel Investment Group, and ExodusPoint Capital were also bullish on ACM Research, Inc. (NASDAQ:ACMR), allocating a large percentage of their portfolios to this stock.

As aggregate interest increased, key hedge funds were leading the bulls’ herd. Millennium Management, managed by Israel Englander, established the biggest position in ACM Research, Inc. (NASDAQ:ACMR). Millennium Management had $3 million invested in the company at the end of the quarter. Peter Rathjens, Bruce Clarke and John Campbell’s Arrowstreet Capital also made a $1.4 million investment in the stock during the quarter. The other funds with new positions in the stock are Renaissance Technologies, Ken Griffin’s Citadel Investment Group, and Michael Gelband’s ExodusPoint Capital.

As you can see these stocks had an average of 7.25 hedge funds with bullish positions and the average amount invested in these stocks was $33 million. That figure was $6 million in ACMR’s case. Titan International Inc (NYSE:TWI) is the most popular stock in this table. On the other hand TuanChe Limited (NASDAQ:TC) is the least popular one with only 2 bullish hedge fund positions. ACM Research, Inc. (NASDAQ:ACMR) is not the least popular stock in this group but hedge fund interest is still below average. This is a slightly negative signal and we’d rather spend our time researching stocks that hedge funds are piling on. Our calculations showed that top 20 most popular stocks among hedge funds returned 24.4% in 2019 through September 30th and outperformed the S&P 500 ETF (SPY) by 4 percentage points. Unfortunately ACMR wasn’t nearly as popular as these 20 stocks (hedge fund sentiment was quite bearish); ACMR investors were disappointed as the stock returned -11.2% during the third quarter and underperformed the market. If you are interested in investing in large cap stocks with huge upside potential, you should check out the top 20 most popular stocks among hedge funds as many of these stocks already outperformed the market so far in 2019.

5 Best Stocks To Buy Right Now According To Billionaire Einhorn
Monthly Newsletter Strategy
Download a free copy of our newsletter and see the details inside!
Hedge Fund Resource Center
Related News
11 Largest Auto Insurance Companies In The US In 2019 10 Poorest Cities in America in 2019 8 Lowest Tar and Nicotine Cigarette Brands in 2019
Billionaire Hedge Funds