At Insider Monkey, we pore over the filings of nearly 750 top investment firms every quarter, a process we have now completed for the latest reporting period. The data we’ve gathered as a result gives us access to a wealth of collective knowledge based on these firms’ portfolio holdings as of June 28. In this article, we will use that wealth of knowledge to determine whether or not William Lyon Homes (NYSE:WLH) makes for a good investment right now.

William Lyon Homes (NYSE:WLH) has experienced an increase in hedge fund interest in recent months. WLH was in 24 hedge funds’ portfolios at the end of June. There were 23 hedge funds in our database with WLH holdings at the end of the previous quarter. Our calculations also showed that WLH isn’t among the 30 most popular stocks among hedge funds (see the video below).

In the 21st century investor’s toolkit there are numerous signals investors use to appraise stocks. A pair of the most under-the-radar signals are hedge fund and insider trading moves. Our researchers have shown that, historically, those who follow the best picks of the elite investment managers can trounce the broader indices by a solid amount (see the details here).

What have hedge funds been doing with William Lyon Homes (NYSE:WLH)? 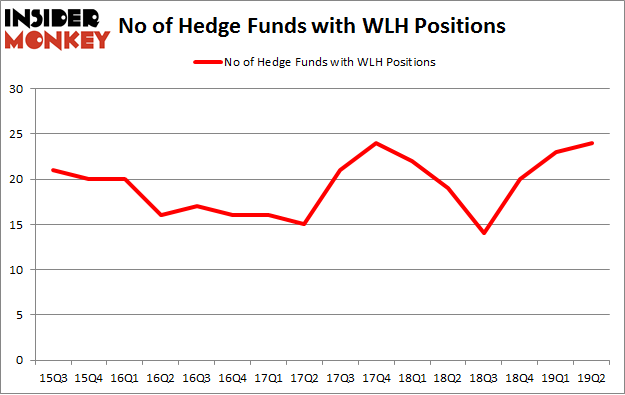 Among these funds, Long Pond Capital held the most valuable stake in William Lyon Homes (NYSE:WLH), which was worth $45.2 million at the end of the second quarter. On the second spot was GMT Capital which amassed $18.2 million worth of shares. Moreover, Miller Value Partners, Balyasny Asset Management, and Royce & Associates were also bullish on William Lyon Homes (NYSE:WLH), allocating a large percentage of their portfolios to this stock.

With a general bullishness amongst the heavyweights, specific money managers were leading the bulls’ herd. Miller Value Partners, managed by Bill Miller, assembled the largest position in William Lyon Homes (NYSE:WLH). Miller Value Partners had $14.8 million invested in the company at the end of the quarter. Dmitry Balyasny’s Balyasny Asset Management also initiated a $13.3 million position during the quarter. The other funds with new positions in the stock are Isaac Corre’s Governors Lane, Michael Gelband’s ExodusPoint Capital, and Jonathan Soros’s JS Capital.

As you can see these stocks had an average of 11.25 hedge funds with bullish positions and the average amount invested in these stocks was $74 million. That figure was $151 million in WLH’s case. Monotype Imaging Holdings Inc. (NASDAQ:TYPE) is the most popular stock in this table. On the other hand Allegiance Bancshares, Inc. (NASDAQ:ABTX) is the least popular one with only 6 bullish hedge fund positions. Compared to these stocks William Lyon Homes (NYSE:WLH) is more popular among hedge funds. Our calculations showed that top 20 most popular stocks among hedge funds returned 24.4% in 2019 through September 30th and outperformed the S&P 500 ETF (SPY) by 4 percentage points. Hedge funds were also right about betting on WLH as the stock returned 11.7% during Q3 and outperformed the market by an even larger margin. Hedge funds were clearly right about piling into this stock relative to other stocks with similar market capitalizations.