We at Insider Monkey have gone over 730 13F filings that hedge funds and prominent investors are required to file by the SEC The 13F filings show the funds’ and investors’ portfolio positions as of June 28th. In this article, we look at what those funds think of WD-40 Company (NASDAQ:WDFC) based on that data.

WD-40 Company (NASDAQ:WDFC) has seen an increase in activity from the world’s largest hedge funds of late. WDFC was in 15 hedge funds’ portfolios at the end of the second quarter of 2019. There were 14 hedge funds in our database with WDFC positions at the end of the previous quarter. Our calculations also showed that WDFC isn’t among the 30 most popular stocks among hedge funds (see the video below). 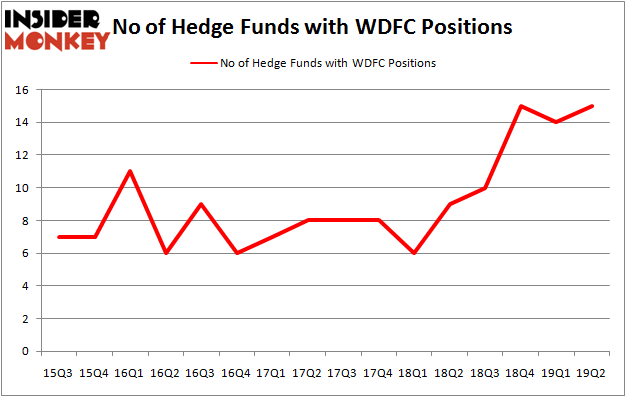 What does smart money think about WD-40 Company (NASDAQ:WDFC)?

The largest stake in WD-40 Company (NASDAQ:WDFC) was held by Renaissance Technologies, which reported holding $61.1 million worth of stock at the end of March. It was followed by GLG Partners with a $30.3 million position. Other investors bullish on the company included Citadel Investment Group, GAMCO Investors, and AQR Capital Management.

Now, specific money managers were leading the bulls’ herd. Laurion Capital Management, managed by Benjamin A. Smith, initiated the most outsized position in WD-40 Company (NASDAQ:WDFC). Laurion Capital Management had $1.3 million invested in the company at the end of the quarter. Dmitry Balyasny’s Balyasny Asset Management also initiated a $1 million position during the quarter. The only other fund with a brand new WDFC position is Bruce Kovner’s Caxton Associates LP.

As you can see these stocks had an average of 10.5 hedge funds with bullish positions and the average amount invested in these stocks was $97 million. That figure was $128 million in WDFC’s case. Belden Inc. (NYSE:BDC) is the most popular stock in this table. On the other hand ESCO Technologies Inc. (NYSE:ESE) is the least popular one with only 4 bullish hedge fund positions. WD-40 Company (NASDAQ:WDFC) is not the most popular stock in this group but hedge fund interest is still above average. Our calculations showed that top 20 most popular stocks among hedge funds returned 24.4% in 2019 through September 30th and outperformed the S&P 500 ETF (SPY) by 4 percentage points. Hedge funds were also right about betting on WDFC as the stock returned 15.8% during the third quarter and outperformed the market. Hedge funds were rewarded for their relative bullishness.