Is TTEC Holdings, Inc. (NASDAQ:TTEC) a good investment right now? We check hedge fund and billionaire investor sentiment before delving into hours of research. Hedge funds spend millions of dollars on Ivy League graduates, expert networks, and get tips from investment bankers and industry insiders. Sure they sometimes fail miserably, but their consensus stock picks historically outperformed the market after adjusting for known risk factors.

TTEC Holdings, Inc. (NASDAQ:TTEC) investors should pay attention to an increase in activity from the world’s largest hedge funds of late. TTEC was in 17 hedge funds’ portfolios at the end of June. There were 15 hedge funds in our database with TTEC holdings at the end of the previous quarter. Our calculations also showed that TTEC isn’t among the 30 most popular stocks among hedge funds (view the video below).

In the financial world there are tons of gauges stock market investors use to value stocks. Two of the most useful gauges are hedge fund and insider trading interest. We have shown that, historically, those who follow the top picks of the elite investment managers can outpace the broader indices by a solid amount (see the details here).

What have hedge funds been doing with TTEC Holdings, Inc. (NASDAQ:TTEC)?

Heading into the third quarter of 2019, a total of 17 of the hedge funds tracked by Insider Monkey held long positions in this stock, a change of 13% from the previous quarter. The graph below displays the number of hedge funds with bullish position in TTEC over the last 16 quarters. With hedgies’ positions undergoing their usual ebb and flow, there exists a select group of noteworthy hedge fund managers who were increasing their holdings substantially (or already accumulated large positions). 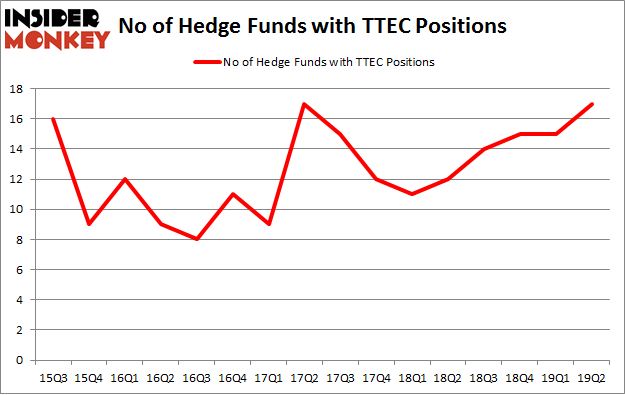 Among these funds, Renaissance Technologies held the most valuable stake in TTEC Holdings, Inc. (NASDAQ:TTEC), which was worth $18.1 million at the end of the second quarter. On the second spot was Shannon River Fund Management which amassed $8.7 million worth of shares. Moreover, Arrowstreet Capital, Citadel Investment Group, and PEAK6 Capital Management were also bullish on TTEC Holdings, Inc. (NASDAQ:TTEC), allocating a large percentage of their portfolios to this stock.

As you can see these stocks had an average of 16 hedge funds with bullish positions and the average amount invested in these stocks was $128 million. That figure was $43 million in TTEC’s case. Verra Mobility Corporation (NASDAQ:VRRM) is the most popular stock in this table. On the other hand Otter Tail Corporation (NASDAQ:OTTR) is the least popular one with only 12 bullish hedge fund positions. TTEC Holdings, Inc. (NASDAQ:TTEC) is not the most popular stock in this group but hedge fund interest is still above average. Our calculations showed that top 20 most popular stocks among hedge funds returned 24.4% in 2019 through September 30th and outperformed the S&P 500 ETF (SPY) by 4 percentage points. Hedge funds were also right about betting on TTEC, though not to the same extent, as the stock returned 3.5% during the third quarter and outperformed the market as well.