Hedge fund interest in TransAlta Corporation (NYSE:TAC) shares was flat at the end of last quarter. This is usually a negative indicator. At the end of this article we will also compare TAC to other stocks including IMAX Corporation (NYSE:IMAX), Nevro Corp (NYSE:NVRO), and Sangamo Therapeutics, Inc. (NASDAQ:SGMO) to get a better sense of its popularity.

In the 21st century investor’s toolkit there are dozens of methods stock market investors have at their disposal to appraise publicly traded companies. A pair of the best methods are hedge fund and insider trading indicators. We have shown that, historically, those who follow the top picks of the elite fund managers can trounce the broader indices by a solid margin (see the details here).

We’re going to take a gander at the new hedge fund action regarding TransAlta Corporation (NYSE:TAC).

At the end of the fourth quarter, a total of 9 of the hedge funds tracked by Insider Monkey were long this stock, a change of 0% from the previous quarter. The graph below displays the number of hedge funds with bullish position in TAC over the last 14 quarters. With the smart money’s capital changing hands, there exists an “upper tier” of notable hedge fund managers who were increasing their holdings substantially (or already accumulated large positions). 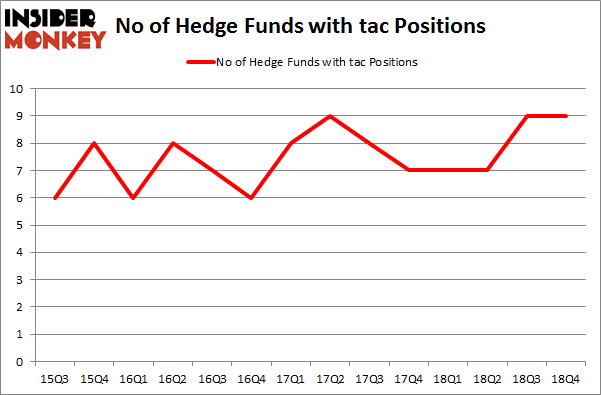 The largest stake in TransAlta Corporation (NYSE:TAC) was held by Arrowstreet Capital, which reported holding $3.8 million worth of stock at the end of December. It was followed by Renaissance Technologies with a $2.7 million position. Other investors bullish on the company included GLG Partners, Two Sigma Advisors, and Citadel Investment Group.

We view hedge fund activity in the stock unfavorable, but in this case there was only a single hedge fund selling its entire position: Magnetar Capital. One hedge fund selling its entire position doesn’t always imply a bearish intent. Theoretically a hedge fund may decide to sell a promising position in order to invest the proceeds in a more promising idea. However, we don’t think this is the case in this case because only one of the 800+ hedge funds tracked by Insider Monkey identified as a viable investment and initiated a position in the stock (that fund was Millennium Management).

As you can see these stocks had an average of 17.25 hedge funds with bullish positions and the average amount invested in these stocks was $107 million. That figure was $13 million in TAC’s case. Sangamo Therapeutics, Inc. (NASDAQ:SGMO) is the most popular stock in this table. On the other hand Frank’s International N.V. (NYSE:FI) is the least popular one with only 12 bullish hedge fund positions. Compared to these stocks TransAlta Corporation (NYSE:TAC) is even less popular than FI. Hedge funds clearly dropped the ball on TAC as the stock delivered strong returns, though hedge funds’ consensus picks still generated respectable returns. Our calculations showed that top 15 most popular stocks) among hedge funds returned 24.2% through April 22nd and outperformed the S&P 500 ETF (SPY) by more than 7 percentage points. A small number of hedge funds were also right about betting on TAC as the stock returned 72.5% and outperformed the market by an even larger margin.