Many investors, including Paul Tudor Jones or Stan Druckenmiller, have been saying before the Q4 market crash that the stock market is overvalued due to a low interest rate environment that leads to companies swapping their equity for debt and focusing mostly on short-term performance such as beating the quarterly earnings estimates. In the fourth quarter, many investors lost money due to unpredictable events such as the sudden increase in long-term interest rates and unintended consequences of the trade war with China. Nevertheless, many of the stocks that tanked in the fourth quarter still sport strong fundamentals and their decline was more related to the general market sentiment rather than their individual performance and hedge funds kept their bullish stance. In this article we will find out how hedge fund sentiment to Saul Centers Inc (NYSE:BFS) changed recently.

Hedge fund interest in Saul Centers Inc (NYSE:BFS) shares was flat at the end of last quarter. This is usually a negative indicator. The level and the change in hedge fund popularity aren’t the only variables you need to analyze to decipher hedge funds’ perspectives. A stock may witness a boost in popularity but it may still be less popular than similarly priced stocks. That’s why at the end of this article we will examine companies such as Rowan Companies plc (NYSE:RDC), Core-Mark Holding Company, Inc. (NASDAQ:CORE), and Corporacion America Airports SA (NYSE:CAAP) to gather more data points.

What have hedge funds been doing with Saul Centers Inc (NYSE:BFS)?

At the end of the fourth quarter, a total of 7 of the hedge funds tracked by Insider Monkey held long positions in this stock, a change of 0% from one quarter earlier. Below, you can check out the change in hedge fund sentiment towards BFS over the last 14 quarters. With hedge funds’ sentiment swirling, there exists an “upper tier” of noteworthy hedge fund managers who were boosting their holdings substantially (or already accumulated large positions). 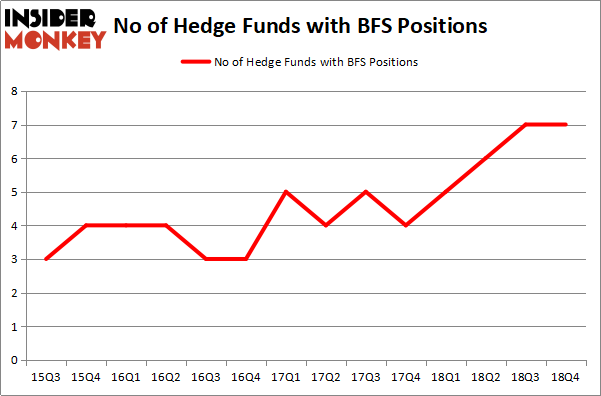 Among these funds, Renaissance Technologies held the most valuable stake in Saul Centers Inc (NYSE:BFS), which was worth $19.9 million at the end of the fourth quarter. On the second spot was Millennium Management which amassed $3 million worth of shares. Moreover, GLG Partners, Citadel Investment Group, and Two Sigma Advisors were also bullish on Saul Centers Inc (NYSE:BFS), allocating a large percentage of their portfolios to this stock.

Due to the fact that Saul Centers Inc (NYSE:BFS) has witnessed a decline in interest from the smart money, it’s easy to see that there was a specific group of hedge funds that elected to cut their positions entirely heading into Q3. Intriguingly, Michael Platt and William Reeves’s BlueCrest Capital Mgmt. sold off the largest investment of all the hedgies monitored by Insider Monkey, totaling an estimated $0.4 million in stock, and Benjamin A. Smith’s Laurion Capital Management was right behind this move, as the fund sold off about $0.3 million worth. These transactions are interesting, as total hedge fund interest stayed the same (this is a bearish signal in our experience).

As you can see these stocks had an average of 13.5 hedge funds with bullish positions and the average amount invested in these stocks was $129 million. That figure was $25 million in BFS’s case. Core-Mark Holding Company, Inc. (NASDAQ:CORE) is the most popular stock in this table. On the other hand Sun Hydraulics Corporation (NASDAQ:SNHY) is the least popular one with only 3 bullish hedge fund positions. Saul Centers Inc (NYSE:BFS) is not the least popular stock in this group but hedge fund interest is still below average. This is a slightly negative signal and we’d rather spend our time researching stocks that hedge funds are piling on. Our calculations showed that top 15 most popular stocks) among hedge funds returned 24.2% through April 22nd and outperformed the S&P 500 ETF (SPY) by more than 7 percentage points. Unfortunately BFS wasn’t nearly as popular as these 15 stock (hedge fund sentiment was quite bearish); BFS investors were disappointed as the stock returned 13% and underperformed the market. If you are interested in investing in large cap stocks with huge upside potential, you should check out the top 15 most popular stocks) among hedge funds as 13 of these stocks already outperformed the market this year.