Hedge Funds and other institutional investors have just completed filing their 13Fs with the Securities and Exchange Commission, revealing their equity portfolios as of the end of December. At Insider Monkey, we follow nearly 750 active hedge funds and notable investors and by analyzing their 13F filings, we can determine the stocks that they are collectively bullish on. One of their picks is Ruth’s Hospitality Group, Inc. (NASDAQ:RUTH), so let’s take a closer look at the sentiment that surrounds it in the current quarter.

Ruth’s Hospitality Group, Inc. (NASDAQ:RUTH) has seen an increase in support from the world’s most elite money managers in recent months. Our calculations also showed that RUTH isn’t among the 30 most popular stocks among hedge funds.

How have hedgies been trading Ruth’s Hospitality Group, Inc. (NASDAQ:RUTH)?

At Q4’s end, a total of 17 of the hedge funds tracked by Insider Monkey were long this stock, a change of 13% from the previous quarter. Below, you can check out the change in hedge fund sentiment towards RUTH over the last 14 quarters. With the smart money’s sentiment swirling, there exists a select group of key hedge fund managers who were upping their stakes meaningfully (or already accumulated large positions). 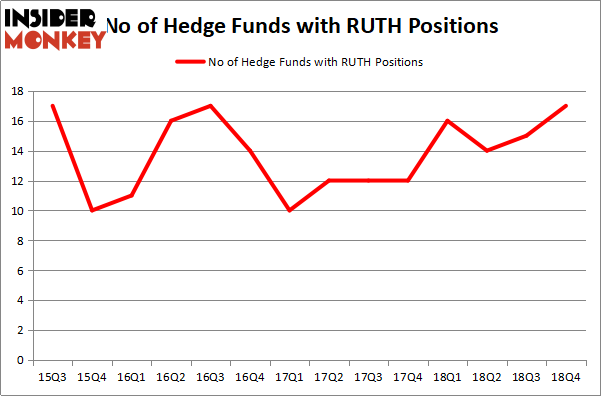 Of the funds tracked by Insider Monkey, Cliff Asness’s AQR Capital Management has the most valuable position in Ruth’s Hospitality Group, Inc. (NASDAQ:RUTH), worth close to $10 million, amounting to less than 0.1%% of its total 13F portfolio. The second most bullish fund manager is Arrowstreet Capital, led by Peter Rathjens, Bruce Clarke and John Campbell, holding a $9.2 million position; less than 0.1%% of its 13F portfolio is allocated to the company. Other members of the smart money that are bullish comprise Noam Gottesman’s GLG Partners, John Overdeck and David Siegel’s Two Sigma Advisors and Jim Simons’s Renaissance Technologies.

As you can see these stocks had an average of 16.75 hedge funds with bullish positions and the average amount invested in these stocks was $122 million. That figure was $50 million in RUTH’s case. Hanger, Inc. (NYSE:HNGR) is the most popular stock in this table. On the other hand Alder Biopharmaceuticals Inc (NASDAQ:ALDR) is the least popular one with only 15 bullish hedge fund positions. Ruth’s Hospitality Group, Inc. (NASDAQ:RUTH) is not the most popular stock in this group but hedge fund interest is still above average. This is a slightly positive signal but we’d rather spend our time researching stocks that hedge funds are piling on. Our calculations showed that top 15 most popular stocks) among hedge funds returned 24.2% through April 22nd and outperformed the S&P 500 ETF (SPY) by more than 7 percentage points. Unfortunately RUTH wasn’t nearly as popular as these 15 stock and hedge funds that were betting on RUTH were disappointed as the stock returned 12.5% and underperformed the market. If you are interested in investing in large cap stocks with huge upside potential, you should check out the top 15 most popular stocks) among hedge funds as 13 of these stocks already outperformed the market this year.