We are still in an overall bull market and many stocks that smart money investors were piling into surged through November 22nd. Among them, Facebook and Microsoft ranked among the top 3 picks and these stocks gained 52% and 49% respectively. Hedge funds’ top 3 stock picks returned 39.1% this year and beat the S&P 500 ETFs by nearly 13 percentage points. Investing in index funds guarantees you average returns, not superior returns. We are looking to generate superior returns for our readers. That’s why we believe it isn’t a waste of time to check out hedge fund sentiment before you invest in a stock like RingCentral Inc (NYSE:RNG).

Is RingCentral Inc (NYSE:RNG) a buy, sell, or hold? Prominent investors are betting on the stock. The number of bullish hedge fund bets rose by 3 lately. Our calculations also showed that RNG isn’t among the 30 most popular stocks among hedge funds (see the video below for second quarter’s top hedge fund stocks). RNG was in 48 hedge funds’ portfolios at the end of the third quarter of 2019. There were 45 hedge funds in our database with RNG positions at the end of the previous quarter.

Unlike the largest US hedge funds that are convinced Dow will soar past 40,000 or the world’s most bearish hedge fund that’s more convinced than ever that a crash is coming, our long-short investment strategy doesn’t rely on bull or bear markets to deliver double digit returns. We’re going to check out the fresh hedge fund action encompassing RingCentral Inc (NYSE:RNG).

Heading into the fourth quarter of 2019, a total of 48 of the hedge funds tracked by Insider Monkey held long positions in this stock, a change of 7% from one quarter earlier. The graph below displays the number of hedge funds with bullish position in RNG over the last 17 quarters. With hedge funds’ capital changing hands, there exists a few noteworthy hedge fund managers who were boosting their holdings meaningfully (or already accumulated large positions). 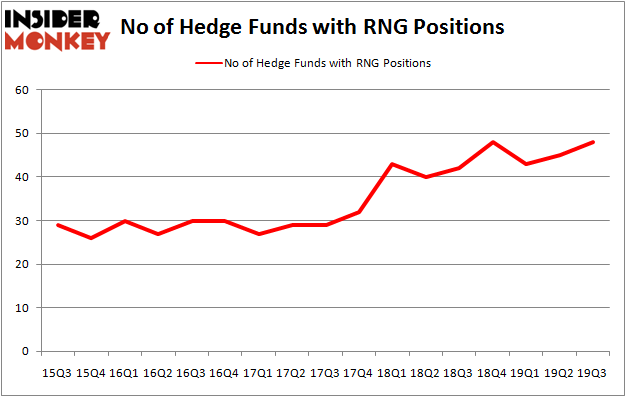 Among these funds, Tiger Global Management held the most valuable stake in RingCentral Inc (NYSE:RNG), which was worth $410 million at the end of the third quarter. On the second spot was Alkeon Capital Management which amassed $290 million worth of shares. SCGE Management, Two Sigma Advisors, and 12 West Capital Management were also very fond of the stock, becoming one of the largest hedge fund holders of the company. In terms of the portfolio weights assigned to each position Hunt Lane Capital allocated the biggest weight to RingCentral Inc (NYSE:RNG), around 9.36% of its portfolio. SCGE Management is also relatively very bullish on the stock, dishing out 6.55 percent of its 13F equity portfolio to RNG.

As industrywide interest jumped, key hedge funds have jumped into RingCentral Inc (NYSE:RNG) headfirst. Holocene Advisors, managed by Brandon Haley, created the most outsized position in RingCentral Inc (NYSE:RNG). Holocene Advisors had $60.6 million invested in the company at the end of the quarter. Philippe Laffont’s Coatue Management also made a $55.6 million investment in the stock during the quarter. The other funds with brand new RNG positions are Michel Massoud’s Melqart Asset Management, Bernard Selz’s Selz Capital, and David Harding’s Winton Capital Management.

As you can see these stocks had an average of 28.25 hedge funds with bullish positions and the average amount invested in these stocks was $1127 million. That figure was $1616 million in RNG’s case. Mylan N.V. (NASDAQ:MYL) is the most popular stock in this table. On the other hand Federal Realty Investment Trust (NYSE:FRT) is the least popular one with only 22 bullish hedge fund positions. Compared to these stocks RingCentral Inc (NYSE:RNG) is more popular among hedge funds. Our calculations showed that top 20 most popular stocks among hedge funds returned 34.7% in 2019 through November 22nd and outperformed the S&P 500 ETF (SPY) by 8.5 percentage points. Hedge funds were also right about betting on RNG as the stock returned 34.4% during Q4 (through 11/22) and outperformed the market by an even larger margin. Hedge funds were clearly right about piling into this stock relative to other stocks with similar market capitalizations.