Will the new coronavirus cause a recession in US in the next 6 months? On February 27th, we put the probability at 75% and we predicted that the market will decline by at least 20% in (Recession is Imminent: We Need A Travel Ban NOW). In these volatile markets we scrutinize hedge fund filings to get a reading on which direction each stock might be going. In this article, we will take a closer look at hedge fund sentiment towards RealPage, Inc. (NASDAQ:RP).

RealPage, Inc. (NASDAQ:RP) shares haven’t seen a lot of action during the fourth quarter. Overall, hedge fund sentiment was unchanged. The stock was in 36 hedge funds’ portfolios at the end of December. At the end of this article we will also compare RP to other stocks including Manhattan Associates, Inc. (NASDAQ:MANH), World Wrestling Entertainment, Inc. (NYSE:WWE), and Eastgroup Properties Inc (NYSE:EGP) to get a better sense of its popularity.

We leave no stone unturned when looking for the next great investment idea. For example we recently identified a stock that trades 25% below the net cash on its balance sheet. We read hedge fund investor letters and listen to stock pitches at hedge fund conferences, and go through short-term trade recommendations like this one. We even check out the recommendations of services with hard to believe track records. Our best call in 2020 was shorting the market when S&P 500 was trading at 3150 after realizing the coronavirus pandemic’s significance before most investors. Now let’s take a gander at the latest hedge fund action regarding RealPage, Inc. (NASDAQ:RP). 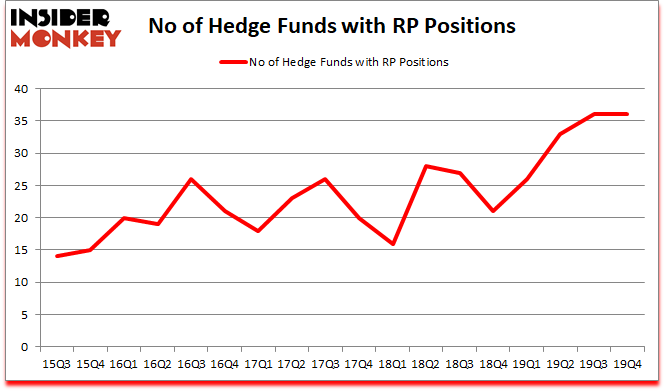 According to Insider Monkey’s hedge fund database, Ricky Sandler’s Eminence Capital has the biggest position in RealPage, Inc. (NASDAQ:RP), worth close to $203.6 million, corresponding to 2.3% of its total 13F portfolio. Coming in second is Stockbridge Partners, led by Sharlyn C. Heslam, holding a $162.3 million position; the fund has 5.9% of its 13F portfolio invested in the stock. Other members of the smart money with similar optimism comprise Greg Poole’s Echo Street Capital Management, Israel Englander’s Millennium Management and D. E. Shaw’s D E Shaw. In terms of the portfolio weights assigned to each position Stockbridge Partners allocated the biggest weight to RealPage, Inc. (NASDAQ:RP), around 5.89% of its 13F portfolio. Potrero Capital Research is also relatively very bullish on the stock, designating 4.89 percent of its 13F equity portfolio to RP.

Judging by the fact that RealPage, Inc. (NASDAQ:RP) has experienced declining sentiment from hedge fund managers, it’s safe to say that there exists a select few fund managers who were dropping their positions entirely last quarter. Interestingly, James Parsons’s Junto Capital Management dropped the biggest position of the 750 funds tracked by Insider Monkey, totaling an estimated $43.2 million in stock. Steve Cohen’s fund, Point72 Asset Management, also dumped its stock, about $37.6 million worth. These transactions are intriguing to say the least, as total hedge fund interest stayed the same (this is a bearish signal in our experience).

As you can see these stocks had an average of 24.5 hedge funds with bullish positions and the average amount invested in these stocks was $441 million. That figure was $604 million in RP’s case. Tech Data Corp (NASDAQ:TECD) is the most popular stock in this table. On the other hand Eastgroup Properties Inc (NYSE:EGP) is the least popular one with only 10 bullish hedge fund positions. Compared to these stocks RealPage, Inc. (NASDAQ:RP) is more popular among hedge funds. Our calculations showed that top 20 most popular stocks among hedge funds returned 41.3% in 2019 and outperformed the S&P 500 ETF (SPY) by 10.1 percentage points. These stocks lost 17.4% in 2020 through March 25th but still managed to beat the market by 5.5 percentage points. Hedge funds were also right about betting on RP as the stock returned -3.1% so far in Q1 (through March 25th) and outperformed the market by an even larger margin. Hedge funds were clearly right about piling into this stock relative to other stocks with similar market capitalizations.