PennyMac Financial Services Inc (NYSE:PFSI) shares haven’t seen a lot of action during the second quarter. Overall, hedge fund sentiment was unchanged. The stock was in 16 hedge funds’ portfolios at the end of June. The level and the change in hedge fund popularity aren’t the only variables you need to analyze to decipher hedge funds’ perspectives. A stock may witness a boost in popularity but it may still be less popular than similarly priced stocks. That’s why at the end of this article we will examine companies such as Kronos Worldwide, Inc. (NYSE:KRO), Plexus Corp. (NASDAQ:PLXS), and Kaman Corporation (NYSE:KAMN) to gather more data points. Our calculations also showed that PFSI isn’t among the 30 most popular stocks among hedge funds (see the video below). 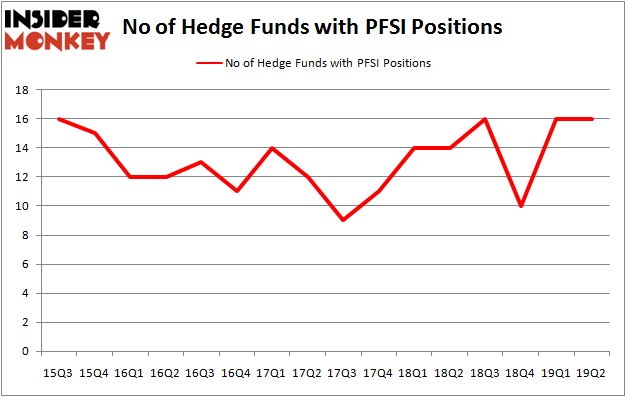 How have hedgies been trading PennyMac Financial Services Inc (NYSE:PFSI)?

The largest stake in PennyMac Financial Services Inc (NYSE:PFSI) was held by PAR Capital Management, which reported holding $21.1 million worth of stock at the end of March. It was followed by Rima Senvest Management with a $20 million position. Other investors bullish on the company included Basswood Capital, Long Pond Capital, and Millennium Management.

Since PennyMac Financial Services Inc (NYSE:PFSI) has witnessed bearish sentiment from the entirety of the hedge funds we track, it’s safe to say that there was a specific group of hedgies who sold off their entire stakes heading into Q3. At the top of the heap, Peter Rathjens, Bruce Clarke and John Campbell’s Arrowstreet Capital dropped the biggest investment of the 750 funds monitored by Insider Monkey, totaling about $1.7 million in stock. Andrew Feldstein and Stephen Siderow’s fund, Blue Mountain Capital, also sold off its stock, about $0.2 million worth. These transactions are important to note, as total hedge fund interest stayed the same (this is a bearish signal in our experience).

As you can see these stocks had an average of 14.25 hedge funds with bullish positions and the average amount invested in these stocks was $126 million. That figure was $105 million in PFSI’s case. WillScot Corporation (NASDAQ:WSC) is the most popular stock in this table. On the other hand Plexus Corp. (NASDAQ:PLXS) is the least popular one with only 8 bullish hedge fund positions. PennyMac Financial Services Inc (NYSE:PFSI) is not the most popular stock in this group but hedge fund interest is still above average. Our calculations showed that top 20 most popular stocks among hedge funds returned 24.4% in 2019 through September 30th and outperformed the S&P 500 ETF (SPY) by 4 percentage points. Hedge funds were also right about betting on PFSI as the stock returned 37% during the third quarter and outperformed the market. Hedge funds were rewarded for their relative bullishness.