Peapack-Gladstone Financial Corp (NASDAQ:PGC) shares haven’t seen a lot of action during the third quarter. Overall, hedge fund sentiment was unchanged. The stock was in 15 hedge funds’ portfolios at the end of the fourth quarter of 2018. The level and the change in hedge fund popularity aren’t the only variables you need to analyze to decipher hedge funds’ perspectives. A stock may witness a boost in popularity but it may still be less popular than similarly priced stocks. That’s why at the end of this article we will examine companies such as Sierra Wireless, Inc. (NASDAQ:SWIR), CEVA, Inc. (NASDAQ:CEVA), and Navios Maritime Containers L.P. (NASDAQ:NMCI) to gather more data points. 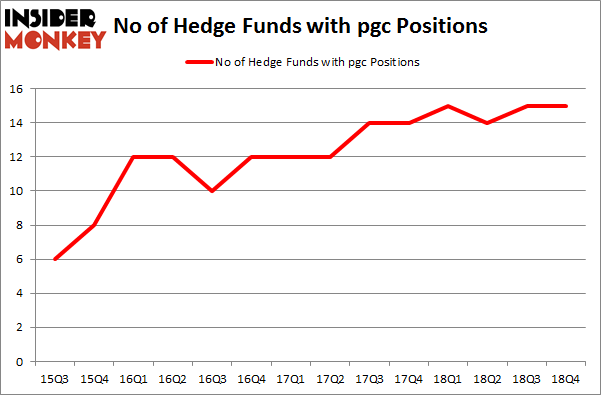 The largest stake in Peapack-Gladstone Financial Corp (NASDAQ:PGC) was held by Basswood Capital, which reported holding $26.6 million worth of stock at the end of December. It was followed by Endicott Management with a $12.6 million position. Other investors bullish on the company included Royce & Associates, Renaissance Technologies, and Mendon Capital Advisors.

Due to the fact that Peapack-Gladstone Financial Corp (NASDAQ:PGC) has experienced a decline in interest from hedge fund managers, logic holds that there lies a certain “tier” of hedgies that slashed their positions entirely last quarter. At the top of the heap, Ken Griffin’s Citadel Investment Group dumped the biggest stake of the 700 funds tracked by Insider Monkey, comprising close to $0.7 million in stock, and Thomas Bailard’s Bailard Inc was right behind this move, as the fund said goodbye to about $0.6 million worth. These bearish behaviors are important to note, as aggregate hedge fund interest stayed the same (this is a bearish signal in our experience).