Like everyone else, elite investors make mistakes. Some of their top consensus picks, such as Amazon, Facebook and Alibaba, have not done well in Q4 due to various reasons. Nevertheless, the data show elite investors’ consensus picks have done well on average over the long-term. The top 20 stocks among hedge funds beat the S&P 500 Index ETF by 4 percentage points so far this year. Because their consensus picks have done well, we pay attention to what elite funds think before doing extensive research on a stock. In this article, we take a closer look at Pacific Biosciences of California, Inc. (NASDAQ:PACB) from the perspective of those elite funds.

Is Pacific Biosciences of California, Inc. (NASDAQ:PACB) going to take off soon? The best stock pickers are becoming more confident. The number of bullish hedge fund positions inched up by 3 lately. Our calculations also showed that PACB isn’t among the 30 most popular stocks among hedge funds (see the video below). PACB was in 22 hedge funds’ portfolios at the end of June. There were 19 hedge funds in our database with PACB holdings at the end of the previous quarter.

What have hedge funds been doing with Pacific Biosciences of California, Inc.(NASDAQ:PACB)? 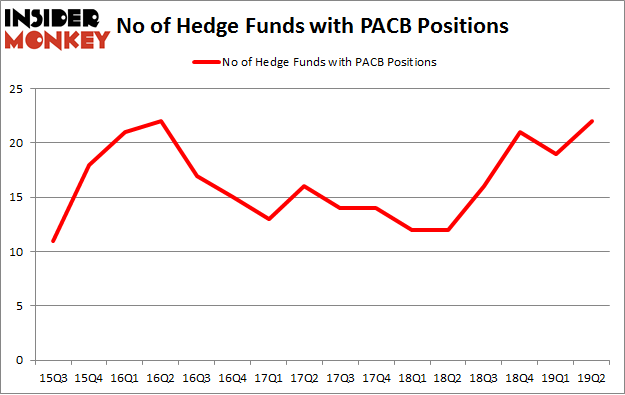 The largest stake in Pacific Biosciences of California, Inc. (NASDAQ:PACB) was held by Magnetar Capital, which reported holding $48 million worth of stock at the end of March. It was followed by Alpine Associates with a $36.8 million position. Other investors bullish on the company included Water Island Capital, GLG Partners, and LMR Partners.

With a general bullishness amongst the heavyweights, specific money managers were leading the bulls’ herd. TIG Advisors, managed by Carl Tiedemann and Michael Tiedemann, assembled the largest position in Pacific Biosciences of California, Inc. (NASDAQ:PACB). TIG Advisors had $1.8 million invested in the company at the end of the quarter. Perella Weinberg Partners also initiated a $1.7 million position during the quarter. The other funds with new positions in the stock are John Overdeck and David Siegel’s Two Sigma Advisors and Gavin Saitowitz and Cisco J. del Valle’s Springbok Capital.

As you can see these stocks had an average of 9.5 hedge funds with bullish positions and the average amount invested in these stocks was $203 million. That figure was $156 million in PACB’s case. OneSpaWorld Holdings Limited (NASDAQ:OSW) is the most popular stock in this table. On the other hand Standex International Corporation (NYSE:SXI) is the least popular one with only 9 bullish hedge fund positions. Compared to these stocks Pacific Biosciences of California, Inc. (NASDAQ:PACB) is more popular among hedge funds. Our calculations showed that top 20 most popular stocks among hedge funds returned 24.4% in 2019 through September 30th and outperformed the S&P 500 ETF (SPY) by 4 percentage points. Unfortunately PACB wasn’t nearly as popular as these 20 stocks and hedge funds that were betting on PACB were disappointed as the stock returned -14.7% during the third quarter and underperformed the market. If you are interested in investing in large cap stocks with huge upside potential, you should check out the top 20 most popular stocks among hedge funds as many of these stocks already outperformed the market in Q3.