Is Noble Midstream Partners LP (NYSE:NBLX) a good equity to bet on right now? We like to check what the smart money thinks first before doing extensive research. Although there have been several high profile failed hedge fund picks, the consensus picks among hedge fund investors have historically outperformed the market after adjusting for known risk attributes. It’s not surprising given that hedge funds have access to better information and more resources to find the winners in the stock market.

Noble Midstream Partners LP (NYSE:NBLX) shares haven’t seen a lot of action during the third quarter. Overall, hedge fund sentiment was unchanged. The stock was in 6 hedge funds’ portfolios at the end of December. At the end of this article we will also compare NBLX to other stocks including Freshpet Inc (NASDAQ:FRPT), Atlantic Tele-Network, Inc. (NASDAQ:ATNI), and Gibraltar Industries Inc (NASDAQ:ROCK) to get a better sense of its popularity.

What have hedge funds been doing with Noble Midstream Partners LP (NYSE:NBLX)?

At the end of the fourth quarter, a total of 6 of the hedge funds tracked by Insider Monkey were bullish on this stock, a change of 0% from the second quarter of 2018. The graph below displays the number of hedge funds with bullish position in NBLX over the last 14 quarters. With the smart money’s positions undergoing their usual ebb and flow, there exists a select group of key hedge fund managers who were boosting their holdings substantially (or already accumulated large positions). 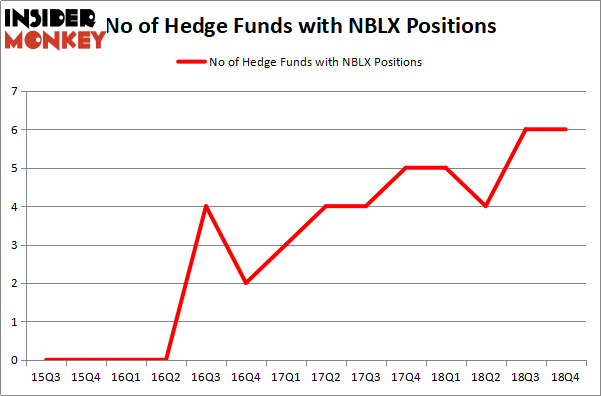 Among these funds, Perella Weinberg Partners held the most valuable stake in Noble Midstream Partners LP (NYSE:NBLX), which was worth $8.4 million at the end of the fourth quarter. On the second spot was Marshall Wace LLP which amassed $7 million worth of shares. Moreover, BP Capital, Citadel Investment Group, and EJF Capital were also bullish on Noble Midstream Partners LP (NYSE:NBLX), allocating a large percentage of their portfolios to this stock.

Judging by the fact that Noble Midstream Partners LP (NYSE:NBLX) has faced falling interest from hedge fund managers, it’s safe to say that there was a specific group of fund managers that slashed their positions entirely in the third quarter. Interestingly, Jim Simons’s Renaissance Technologies cut the biggest investment of all the hedgies watched by Insider Monkey, totaling an estimated $6.7 million in call options. Israel Englander’s fund, Millennium Management, also dropped its call options, about $1.3 million worth. These transactions are intriguing to say the least, as total hedge fund interest stayed the same (this is a bearish signal in our experience).

As you can see these stocks had an average of 12.75 hedge funds with bullish positions and the average amount invested in these stocks was $57 million. That figure was $18 million in NBLX’s case. Freshpet Inc (NASDAQ:FRPT) is the most popular stock in this table. On the other hand ATN International, Inc. (NASDAQ:ATNI) is the least popular one with only 10 bullish hedge fund positions. Compared to these stocks Noble Midstream Partners LP (NYSE:NBLX) is even less popular than ATNI. Hedge funds clearly dropped the ball on NBLX as the stock delivered strong returns, though hedge funds’ consensus picks still generated respectable returns. Our calculations showed that top 15 most popular stocks) among hedge funds returned 24.2% through April 22nd and outperformed the S&P 500 ETF (SPY) by more than 7 percentage points. A small number of hedge funds were also right about betting on NBLX as the stock returned 34.9% and outperformed the market by an even larger margin.