National Fuel Gas Company (NYSE:NFG) has seen an increase in enthusiasm from smart money recently. Our calculations also showed that NFG isn’t among the 30 most popular stocks among hedge funds (view the video below).

In the 21st century investor’s toolkit there are many indicators stock market investors have at their disposal to evaluate their stock investments. A couple of the most useful indicators are hedge fund and insider trading indicators. Our experts have shown that, historically, those who follow the top picks of the best fund managers can outpace the S&P 500 by a solid amount (see the details here). 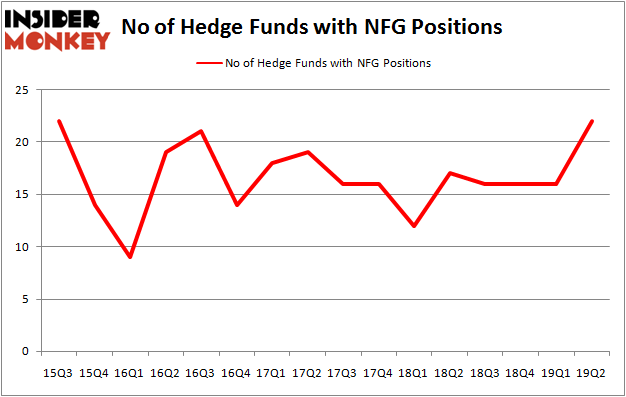 What have hedge funds been doing with National Fuel Gas Company (NYSE:NFG)?

The largest stake in National Fuel Gas Company (NYSE:NFG) was held by GAMCO Investors, which reported holding $122.7 million worth of stock at the end of March. It was followed by Millennium Management with a $26.5 million position. Other investors bullish on the company included Winton Capital Management, GLG Partners, and Private Capital Management.

As you can see these stocks had an average of 24.75 hedge funds with bullish positions and the average amount invested in these stocks was $271 million. That figure was $241 million in NFG’s case. Western Alliance Bancorporation (NYSE:WAL) is the most popular stock in this table. On the other hand MAXIMUS, Inc. (NYSE:MMS) is the least popular one with only 22 bullish hedge fund positions. Compared to these stocks National Fuel Gas Company (NYSE:NFG) is even less popular than MMS. Hedge funds dodged a bullet by taking a bearish stance towards NFG. Our calculations showed that the top 20 most popular hedge fund stocks returned 24.4% in 2019 through September 30th and outperformed the S&P 500 ETF (SPY) by 4 percentage points. Unfortunately NFG wasn’t nearly as popular as these 20 stocks (hedge fund sentiment was very bearish); NFG investors were disappointed as the stock returned -10.2% during the third quarter and underperformed the market. If you are interested in investing in large cap stocks with huge upside potential, you should check out the top 20 most popular stocks among hedge funds as many of these stocks already outperformed the market so far in 2019.