The latest 13F reporting period has come and gone, and Insider Monkey is again at the forefront when it comes to making use of this gold mine of data. We at Insider Monkey have gone over 730 13F filings that hedge funds and well-known value investors are required to file by the SEC. The 13F filings show the funds’ and investors’ portfolio positions as of June 28th. In this article we look at what those investors think of MAXIMUS, Inc. (NYSE:MMS).

MAXIMUS, Inc. (NYSE:MMS) has experienced an increase in support from the world’s most elite money managers of late. MMS was in 22 hedge funds’ portfolios at the end of the second quarter of 2019. There were 20 hedge funds in our database with MMS positions at the end of the previous quarter. Our calculations also showed that MMS isn’t among the 30 most popular stocks among hedge funds (view the video below).

To the average investor there are tons of indicators investors can use to analyze their holdings. A duo of the less known indicators are hedge fund and insider trading signals. Our researchers have shown that, historically, those who follow the best picks of the best investment managers can outclass the S&P 500 by a solid margin (see the details here). 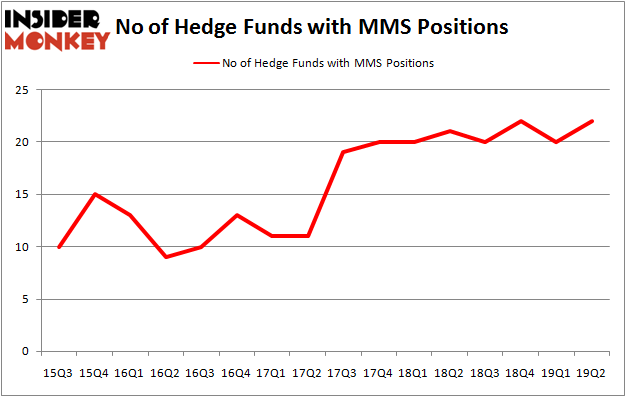 What does smart money think about MAXIMUS, Inc. (NYSE:MMS)?

Heading into the third quarter of 2019, a total of 22 of the hedge funds tracked by Insider Monkey held long positions in this stock, a change of 10% from the previous quarter. The graph below displays the number of hedge funds with bullish position in MMS over the last 16 quarters. So, let’s see which hedge funds were among the top holders of the stock and which hedge funds were making big moves.

As you can see these stocks had an average of 20.5 hedge funds with bullish positions and the average amount invested in these stocks was $274 million. That figure was $219 million in MMS’s case. OneMain Holdings Inc (NYSE:OMF) is the most popular stock in this table. On the other hand Empire State Realty Trust Inc (NYSE:ESRT) is the least popular one with only 12 bullish hedge fund positions. MAXIMUS, Inc. (NYSE:MMS) is not the most popular stock in this group but hedge fund interest is still above average. Our calculations showed that top 20 most popular stocks among hedge funds returned 24.4% in 2019 through September 30th and outperformed the S&P 500 ETF (SPY) by 4 percentage points. Hedge funds were also right about betting on MMS as the stock returned 6.9% during the third quarter and outperformed the market. Hedge funds were rewarded for their relative bullishness.