We know that hedge funds generate strong, risk-adjusted returns over the long run, therefore imitating the picks that they are collectively bullish on can be a profitable strategy for retail investors. With billions of dollars in assets, smart money investors have to conduct complex analyses, spend many resources and use tools that are not always available for the general crowd. This doesn’t mean that they don’t have occasional colossal losses; they do (like Peltz’s recent General Electric losses). However, it is still a good idea to keep an eye on hedge fund activity. With this in mind, as the current round of 13F filings has just ended, let’s examine the smart money sentiment towards Manchester United PLC (NYSE:MANU) which has one of the best French soccer players in its squad.

Is Manchester United PLC (NYSE:MANU) a healthy stock for your portfolio? Prominent investors are getting more optimistic. The number of bullish hedge fund positions rose by 1 in recent months. Our calculations also showed that MANU isn’t among the 30 most popular stocks among hedge funds (click for Q3 rankings and see the video below for Q2 rankings). MANU was in 11 hedge funds’ portfolios at the end of the third quarter of 2019. There were 10 hedge funds in our database with MANU positions at the end of the previous quarter.

We leave no stone unturned when looking for the next great investment idea. For example Discover is offering this insane cashback card, so we look into shorting the stock. One of the most bullish analysts in America just put his money where his mouth is. He says, “I’m investing more today than I did back in early 2009.” So we check out his pitch. We read hedge fund investor letters and listen to stock pitches at hedge fund conferences. We even check out this option genius’ weekly trade ideas. This December we recommended Adams Energy  based on an under-the-radar fund manager’s investor letter and the stock gained 20 percent. Let’s take a glance at the fresh hedge fund action encompassing Manchester United PLC (NYSE:MANU).

What have hedge funds been doing with Manchester United PLC (NYSE:MANU)?

At the end of the third quarter, a total of 11 of the hedge funds tracked by Insider Monkey were long this stock, a change of 10% from one quarter earlier. Below, you can check out the change in hedge fund sentiment towards MANU over the last 17 quarters. So, let’s examine which hedge funds were among the top holders of the stock and which hedge funds were making big moves. 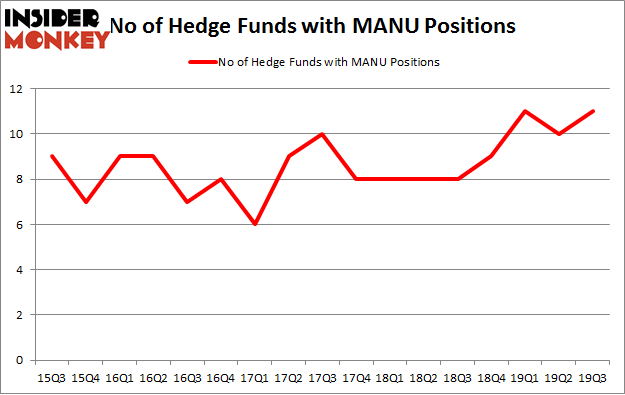 More specifically, Renaissance Technologies was the largest shareholder of Manchester United PLC (NYSE:MANU), with a stake worth $11.1 million reported as of the end of September. Trailing Renaissance Technologies was Lansdowne Partners, which amassed a stake valued at $6.1 million. D E Shaw, Alyeska Investment Group, and Potrero Capital Research were also very fond of the stock, becoming one of the largest hedge fund holders of the company. In terms of the portfolio weights assigned to each position Potrero Capital Research allocated the biggest weight to Manchester United PLC (NYSE:MANU), around 1.57% of its 13F portfolio. Intrepid Capital Management is also relatively very bullish on the stock, designating 0.84 percent of its 13F equity portfolio to MANU.

As industrywide interest jumped, some big names were leading the bulls’ herd. Intrepid Capital Management, managed by Mark Travis, created the most outsized position in Manchester United PLC (NYSE:MANU). Intrepid Capital Management had $1.6 million invested in the company at the end of the quarter. Tom Sandell’s Sandell Asset Management also initiated a $0.4 million position during the quarter. The only other fund with a new position in the stock is Israel Englander’s Millennium Management.

As you can see these stocks had an average of 12.25 hedge funds with bullish positions and the average amount invested in these stocks was $128 million. That figure was $32 million in MANU’s case. Emergent Biosolutions Inc (NYSE:EBS) is the most popular stock in this table. On the other hand AMN Healthcare Services Inc (NYSE:AMN) is the least popular one with only 7 bullish hedge fund positions. Manchester United PLC (NYSE:MANU) is not the least popular stock in this group but hedge fund interest is still below average. Our calculations showed that top 20 most popular stocks among hedge funds returned 37.4% in 2019 through the end of November and outperformed the S&P 500 ETF (SPY) by 9.9 percentage points. A small number of hedge funds were also right about betting on MANU as the stock returned 13.1% during the first two months of Q4 and outperformed the market by an even larger margin.

Hedge Funds Are Betting On Matson, Inc. (MATX)
Monthly Newsletter Strategy
Download a free copy of our newsletter and see the details inside!
Hedge Fund Resource Center
Related News
Hedge Funds Had Impeccable Timing Buying Myovant Sciences Ltd. (MYOV) A Much Better Dividend Stock Than These Dividend Kings Is This The Best Idea These Hedge Funds Can Come Up With? Hedge Funds Love Hertz Global Holdings, Inc. (HTZ) Way More Than These 3 Stocks Hedge Funds Are Coming Back To Adient plc (ADNT) Not Much Chemistry Between Sanofi (SNY) and Hedge Funds Hedge Funds Watching Interactive Brokers Group, Inc. (IBKR) From Afar 10 Countries with the Highest Coffee Consumption in the World 10 Stocks That Went Up During The 2008 Crash 10 Movies About Amnesia on Netflix
Billionaire Hedge Funds