Concerns over rising interest rates and expected further rate increases have hit several stocks hard during the fourth quarter. NASDAQ and Russell 2000 indices were already in correction territory. More importantly, Russell 2000 ETF (IWM) underperformed the larger S&P 500 ETF (SPY) by nearly 7 percentage points in the fourth quarter. Hedge funds and institutional investors tracked by Insider Monkey usually invest a disproportionate amount of their portfolios in smaller cap stocks. We have been receiving indications that hedge funds were paring back their overall exposure and this is one of the factors behind the recent movements in major indices. In this article, we will take a closer look at hedge fund sentiment towards Luxfer Holdings PLC (NYSE:LXFR).

Heading into the first quarter of 2019, a total of 12 of the hedge funds tracked by Insider Monkey were bullish on this stock, a change of 50% from the previous quarter. Below, you can check out the change in hedge fund sentiment towards LXFR over the last 14 quarters. With hedge funds’ positions undergoing their usual ebb and flow, there exists a select group of noteworthy hedge fund managers who were upping their stakes meaningfully (or already accumulated large positions). 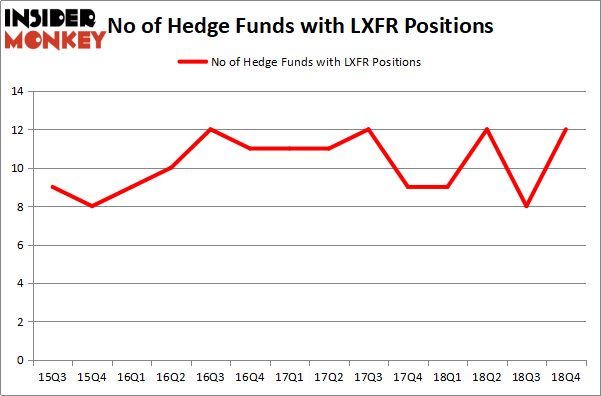 When looking at the institutional investors followed by Insider Monkey, Nantahala Capital Management, managed by Wilmot B. Harkey and Daniel Mack, holds the most valuable position in Luxfer Holdings PLC (NYSE:LXFR). Nantahala Capital Management has a $46.5 million position in the stock, comprising 1.4% of its 13F portfolio. The second most bullish fund manager is Renaissance Technologies, managed by Jim Simons, which holds a $15.5 million position; less than 0.1%% of its 13F portfolio is allocated to the stock. Some other professional money managers that are bullish encompass Chuck Royce’s Royce & Associates, Paul Marshall and Ian Wace’s Marshall Wace LLP and Richard Driehaus’s Driehaus Capital.

As you can see these stocks had an average of 10.25 hedge funds with bullish positions and the average amount invested in these stocks was $29 million. That figure was $79 million in LXFR’s case. Insteel Industries Inc (NASDAQ:IIIN) is the most popular stock in this table. On the other hand Osiris Therapeutics, Inc. (NASDAQ:OSIR) is the least popular one with only 8 bullish hedge fund positions. Luxfer Holdings PLC (NYSE:LXFR) is not the most popular stock in this group but hedge fund interest is still above average. Our calculations showed that top 15 most popular stocks) among hedge funds returned 24.2% through April 22nd and outperformed the S&P 500 ETF (SPY) by more than 7 percentage points. Hedge funds were also right about betting on LXFR as the stock returned 44.4% and outperformed the market by an even larger margin. Hedge funds were rewarded for their relative bullishness.