It was a rough fourth quarter for many hedge funds, which were naturally unable to overcome the big dip in the broad market, as the S&P 500 fell by about 4.8% during 2018 and average hedge fund losing about 1%. The Russell 2000, composed of smaller companies, performed even worse, trailing the S&P by more than 6 percentage points, as investors fled less-known quantities for safe havens. Luckily hedge funds were shifting their holdings into large-cap stocks. The 20 most popular hedge fund stocks actually generated an average return of 24.4% during the first 9 months of 2019 and outperformed the S&P 500 ETF by 4 percentage points. We are done processing the latest 13f filings and in this article we will study how hedge fund sentiment towards Kadmon Holdings, Inc. (NYSE:KDMN) changed during the first quarter.

Hedge fund interest in Kadmon Holdings, Inc. (NYSE:KDMN) shares was flat at the end of last quarter. This is usually a negative indicator. At the end of this article we will also compare KDMN to other stocks including First Choice Bancorp (NASDAQ:FCBP), Reliant Bancorp, Inc. (NASDAQ:RBNC), and CapStar Financial Holdings, Inc. (NASDAQ:CSTR) to get a better sense of its popularity.

In addition to following the biggest hedge funds for investment ideas, we also share stock pitches from conferences, investor letters and other sources  like this one where the fund manager is talking about two under the radar 1000% return potential stocks: first one in internet infrastructure and the second in the heart of advertising market. We use hedge fund buy/sell signals to determine whether to conduct in-depth analysis of these stock ideas which take days. Let’s analyze the latest hedge fund action surrounding Kadmon Holdings, Inc. (NYSE:KDMN).

What does smart money think about Kadmon Holdings, Inc. (NYSE:KDMN)? 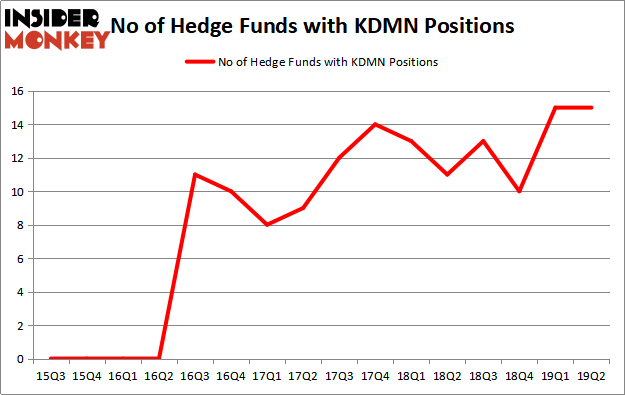 More specifically, Perceptive Advisors was the largest shareholder of Kadmon Holdings, Inc. (NYSE:KDMN), with a stake worth $27.1 million reported as of the end of March. Trailing Perceptive Advisors was Vivo Capital, which amassed a stake valued at $26 million. Consonance Capital Management, Third Point, and Millennium Management were also very fond of the stock, giving the stock large weights in their portfolios.

We view hedge fund activity in the stock unfavorable, but in this case there was only a single hedge fund selling its entire position: ExodusPoint Capital. One hedge fund selling its entire position doesn’t always imply a bearish intent. Theoretically a hedge fund may decide to sell a promising position in order to invest the proceeds in a more promising idea. However, we don’t think this is the case in this case because only one of the 800+ hedge funds tracked by Insider Monkey identified as a viable investment and initiated a position in the stock (that fund was D E Shaw).

As you can see these stocks had an average of 2.25 hedge funds with bullish positions and the average amount invested in these stocks was $13 million. That figure was $117 million in KDMN’s case. CapStar Financial Holdings, Inc. (NASDAQ:CSTR) is the most popular stock in this table. On the other hand First Choice Bancorp (NASDAQ:FCBP) is the least popular one with only 1 bullish hedge fund positions. Compared to these stocks Kadmon Holdings, Inc. (NYSE:KDMN) is more popular among hedge funds. Our calculations showed that top 20 most popular stocks among hedge funds returned 24.4% in 2019 through September 30th and outperformed the S&P 500 ETF (SPY) by 4 percentage points. Hedge funds were also right about betting on KDMN as the stock returned 22.3% during Q3 and outperformed the market by an even larger margin. Hedge funds were clearly right about piling into this stock relative to other stocks with similar market capitalizations.