Is Insulet Corporation (NASDAQ:PODD) a buy here? Hedge funds are becoming more confident. The number of long hedge fund bets inched up by 4 lately. Our calculations also showed that PODD isn’t among the 30 most popular stocks among hedge funds (view the video below).

At the moment there are tons of methods investors have at their disposal to grade their holdings. A pair of the best methods are hedge fund and insider trading indicators. We have shown that, historically, those who follow the best picks of the top money managers can beat the market by a significant margin (see the details here).

Unlike some fund managers who are betting on Dow reaching 40000 in a year, our long-short investment strategy doesn’t rely on bull markets to deliver double digit returns. We only rely on hedge fund buy/sell signals. We’re going to go over the key hedge fund action regarding Insulet Corporation (NASDAQ:PODD).

How have hedgies been trading Insulet Corporation (NASDAQ:PODD)? 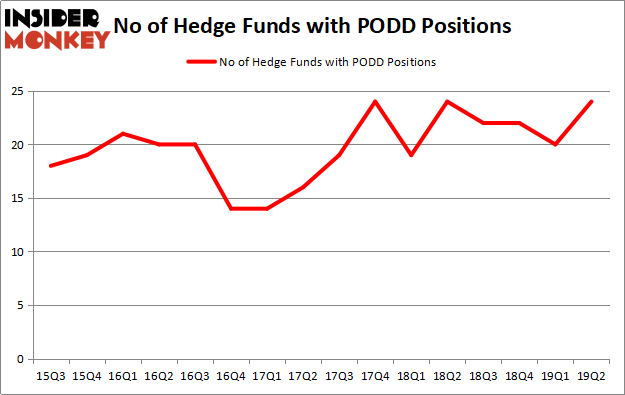 The largest stake in Insulet Corporation (NASDAQ:PODD) was held by D E Shaw, which reported holding $96.3 million worth of stock at the end of March. It was followed by Citadel Investment Group with a $73 million position. Other investors bullish on the company included Deerfield Management, Think Investments, and Rock Springs Capital Management.

As one would reasonably expect, some big names were leading the bulls’ herd. Deerfield Management, managed by James E. Flynn, assembled the most valuable position in Insulet Corporation (NASDAQ:PODD). Deerfield Management had $52.1 million invested in the company at the end of the quarter. Kris Jenner, Gordon Bussard, Graham McPhail’s Rock Springs Capital Management also initiated a $29.2 million position during the quarter. The other funds with brand new PODD positions are Renaissance Technologies, Paul Marshall and Ian Wace’s Marshall Wace LLP, and Phill Gross and Robert Atchinson’s Adage Capital Management.

As you can see these stocks had an average of 31 hedge funds with bullish positions and the average amount invested in these stocks was $1097 million. That figure was $391 million in PODD’s case. Berry Global Group Inc (NYSE:BERY) is the most popular stock in this table. On the other hand Douglas Emmett, Inc. (NYSE:DEI) is the least popular one with only 19 bullish hedge fund positions. Insulet Corporation (NASDAQ:PODD) is not the least popular stock in this group but hedge fund interest is still below average. Our calculations showed that top 20 most popular stocks among hedge funds returned 24.4% in 2019 through September 30th and outperformed the S&P 500 ETF (SPY) by 4 percentage points. A small number of hedge funds were also right about betting on PODD as the stock returned 38.2% during the same time frame and outperformed the market by an even larger margin.