Our extensive research has shown that imitating the smart money can generate significant returns for retail investors, which is why we track nearly 750 active prominent money managers and analyze their quarterly 13F filings. The stocks that are heavily bought by hedge funds historically outperformed the market, though there is no shortage of high profile failures like hedge funds’ 2018 losses in Facebook and Apple. Let’s take a closer look at what the funds we track think about Ingles Markets, Incorporated (NASDAQ:IMKTA) in this article.

Ingles Markets, Incorporated (NASDAQ:IMKTA) has seen an increase in enthusiasm from smart money in recent months. Our calculations also showed that IMKTA isn’t among the 30 most popular stocks among hedge funds (see the video below).

At Q2’s end, a total of 13 of the hedge funds tracked by Insider Monkey were long this stock, a change of 18% from one quarter earlier. By comparison, 7 hedge funds held shares or bullish call options in IMKTA a year ago. With hedge funds’ capital changing hands, there exists a select group of noteworthy hedge fund managers who were upping their stakes considerably (or already accumulated large positions). 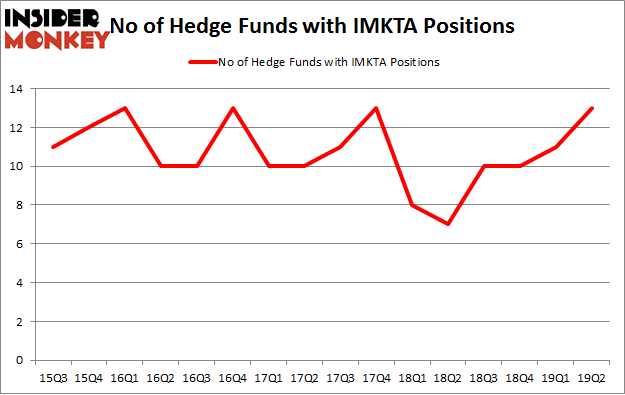 When looking at the institutional investors followed by Insider Monkey, Mario Gabelli’s GAMCO Investors has the largest position in Ingles Markets, Incorporated (NASDAQ:IMKTA), worth close to $32 million, corresponding to 0.2% of its total 13F portfolio. The second largest stake is held by AQR Capital Management, led by Cliff Asness, holding a $2.9 million position; less than 0.1%% of its 13F portfolio is allocated to the stock. Some other members of the smart money that are bullish comprise Peter Rathjens, Bruce Clarke and John Campbell’s Arrowstreet Capital, John Overdeck and David Siegel’s Two Sigma Advisors and Israel Englander’s Millennium Management.

With a general bullishness amongst the heavyweights, specific money managers have jumped into Ingles Markets, Incorporated (NASDAQ:IMKTA) headfirst. Renaissance Technologies initiated the biggest position in Ingles Markets, Incorporated (NASDAQ:IMKTA). Renaissance Technologies had $0.4 million invested in the company at the end of the quarter. David Harding’s Winton Capital Management also initiated a $0.3 million position during the quarter. The following funds were also among the new IMKTA investors: Noam Gottesman’s GLG Partners and Roger Ibbotson’s Zebra Capital Management.

As you can see these stocks had an average of 9.5 hedge funds with bullish positions and the average amount invested in these stocks was $54 million. That figure was $46 million in IMKTA’s case. Kimball International Inc (NASDAQ:KBAL) is the most popular stock in this table. On the other hand KNOT Offshore Partners LP (NYSE:KNOP) is the least popular one with only 5 bullish hedge fund positions. Ingles Markets, Incorporated (NASDAQ:IMKTA) is the most popular stock in this group together with KNOP. Our calculations showed that top 20 most popular stocks among hedge funds returned 24.4% in 2019 through September 30th and outperformed the S&P 500 ETF (SPY) by 4 percentage points. Hedge funds were also right about betting on IMKTA as the stock returned 25.5% during the third quarter and outperformed the market. Hedge funds were rewarded for their relative bullishness.