We are still in an overall bull market and many stocks that smart money investors were piling into surged through October 17th. Among them, Facebook and Microsoft ranked among the top 3 picks and these stocks gained 45% and 39% respectively. Hedge funds’ top 3 stock picks returned 34.4% this year and beat the S&P 500 ETFs by 13 percentage points. Investing in index funds guarantees you average returns, not superior returns. We are looking to generate superior returns for our readers. That’s why we believe it isn’t a waste of time to check out hedge fund sentiment before you invest in a stock like Hilton Grand Vacations Inc. (NYSE:HGV).

Hilton Grand Vacations Inc. (NYSE:HGV) shares haven’t seen a lot of action during the second quarter. Overall, hedge fund sentiment was unchanged. The stock was in 37 hedge funds’ portfolios at the end of June. At the end of this article we will also compare HGV to other stocks including Advanced Disposal Services, Inc. (NYSE:ADSW), Steven Madden, Ltd. (NASDAQ:SHOO), and Pivotal Software, Inc. (NYSE:PVTL) to get a better sense of its popularity.

Today there are several tools market participants use to size up publicly traded companies. A pair of the less known tools are hedge fund and insider trading indicators. Our experts have shown that, historically, those who follow the best picks of the elite hedge fund managers can outpace the market by a significant amount (see the details here). 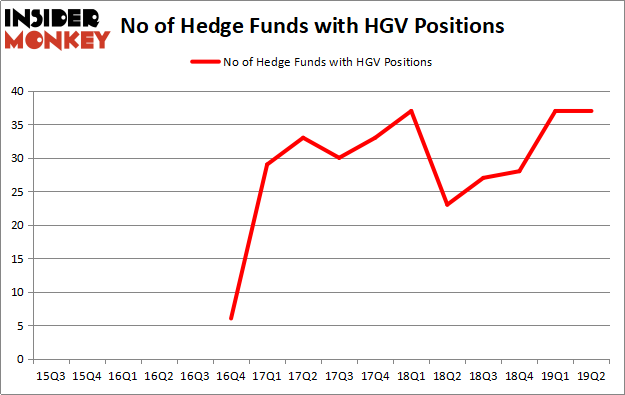 The largest stake in Hilton Grand Vacations Inc. (NYSE:HGV) was held by Long Pond Capital, which reported holding $250.3 million worth of stock at the end of March. It was followed by P2 Capital Partners with a $143.2 million position. Other investors bullish on the company included Centerbridge Partners, Zimmer Partners, and Citadel Investment Group.

Judging by the fact that Hilton Grand Vacations Inc. (NYSE:HGV) has witnessed a decline in interest from the entirety of the hedge funds we track, it’s safe to say that there exists a select few funds who were dropping their positions entirely by the end of the second quarter. Intriguingly, Jeffrey Gates’s Gates Capital Management said goodbye to the biggest investment of the “upper crust” of funds tracked by Insider Monkey, totaling close to $53.3 million in stock. Jonathon Jacobson’s fund, Highfields Capital Management, also said goodbye to its stock, about $43.6 million worth. These transactions are intriguing to say the least, as aggregate hedge fund interest stayed the same (this is a bearish signal in our experience).

As you can see these stocks had an average of 19.75 hedge funds with bullish positions and the average amount invested in these stocks was $237 million. That figure was $959 million in HGV’s case. Advanced Disposal Services, Inc. (NYSE:ADSW) is the most popular stock in this table. On the other hand Steven Madden, Ltd. (NASDAQ:SHOO) is the least popular one with only 14 bullish hedge fund positions. Compared to these stocks Hilton Grand Vacations Inc. (NYSE:HGV) is more popular among hedge funds. Our calculations showed that top 20 most popular stocks among hedge funds returned 24.4% in 2019 through September 30th and outperformed the S&P 500 ETF (SPY) by 4 percentage points. Unfortunately HGV wasn’t nearly as popular as these 20 stocks and hedge funds that were betting on HGV were disappointed as the stock returned 0.6% during the third quarter and underperformed the market. If you are interested in investing in large cap stocks with huge upside potential, you should check out the top 20 most popular stocks among hedge funds as many of these stocks already outperformed the market in Q3.