Although the masses and most of the financial media blame hedge funds for their exorbitant fee structure and disappointing performance, these investors have proved to have great stock picking abilities over the years (that’s why their assets under management continue to swell). We believe hedge fund sentiment should serve as a crucial tool of an individual investor’s stock selection process, as it may offer great insights of how the brightest minds of the finance industry feel about specific stocks. After all, these people have access to smartest analysts and expensive data/information sources that individual investors can’t match. So should one consider investing in Heron Therapeutics Inc (NASDAQ:HRTX)? The smart money sentiment can provide an answer to this question.

Heron Therapeutics Inc (NASDAQ:HRTX) was in 31 hedge funds’ portfolios at the end of March. HRTX investors should pay attention to an increase in hedge fund sentiment lately. There were 25 hedge funds in our database with HRTX holdings at the end of the previous quarter. Our calculations also showed that hrtx isn’t among the 30 most popular stocks among hedge funds.

What have hedge funds been doing with Heron Therapeutics Inc (NASDAQ:HRTX)?

At Q1’s end, a total of 31 of the hedge funds tracked by Insider Monkey were long this stock, a change of 24% from the previous quarter. Below, you can check out the change in hedge fund sentiment towards HRTX over the last 15 quarters. With hedgies’ positions undergoing their usual ebb and flow, there exists a few key hedge fund managers who were increasing their holdings meaningfully (or already accumulated large positions). 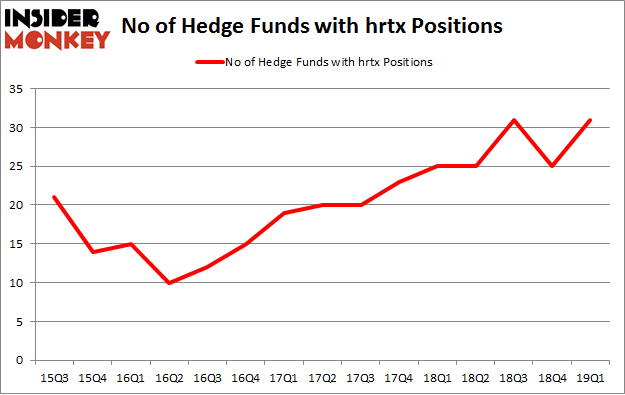 According to Insider Monkey’s hedge fund database, Kevin C. Tang’s Tang Capital Management has the largest position in Heron Therapeutics Inc (NASDAQ:HRTX), worth close to $140.4 million, amounting to 25.9% of its total 13F portfolio. The second most bullish fund manager is Julian Baker and Felix Baker of Baker Bros. Advisors, with a $122.6 million position; 0.8% of its 13F portfolio is allocated to the company. Some other hedge funds and institutional investors that hold long positions encompass Roberto Mignone’s Bridger Management, David Rosen’s Rubric Capital Management and D. E. Shaw’s D E Shaw.